The new New Renault Megane R.S. Trophy-R isn't cheap at over £50k, but there's no other hot hatch quite like it 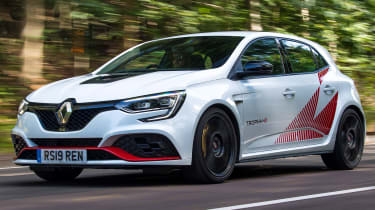 That it’s reasonable to imagine the Renault Megane R.S. Trophy-R as how a front-driven Porsche 911 GT3 would feel shows what a stunning machine it really is. In terms of composure, feel and grip, it’s every inch the beautifully sorted race car for the road - or track. The sort of fastidious upgrades Renault Sport has applied to the Megane give it an eye-watering price for a hatchback, but no other hot hatch - front-wheel drive or otherwise - feels as special.

The first thing that strikes you when you’re behind the wheel of the Renault Megane R.S. Trophy-R is the grip. So strong is the lateral force generated by Renault’s most extreme hot hatch ever, that a few laps on a race track will leave you wishing you’d put a little more effort working on your core muscles, just so you can keep yourself upright in the seat.

That grip is the key reason why this Megane has smashed a series of front-wheel drive lap records. A Nurburgring Nordschleife lap time of 7:40.1 brought the crown back to Renault, at least until Lynk & Co brought its 03 Cyan - essentially a road legal touring car - to fire the benchmark beyond any reasonable reach. The Renault’s 2:48.338 benchmark around Spa Francorchamps is over five seconds quicker than a Honda Civic Type R.

As with previous Trophy-Rs, Renault Sport didn’t turn to a quick remap to eke out that lap time; the 296bhp and 400Nm from its 1.8-litre turbocharged engine are identical to the conventional Megane R.S. No, Renault did it the hard way: suspension revisions, aerodynamic improvements and extreme weight savings. 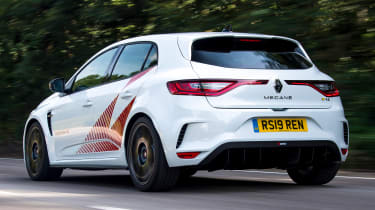 An intense diet has trimmed 130kg from the standard Megane Trophy’s mass, bringing the total to 1,306kg. Up front, a carbon bonnet saves eight kilos compared to the usual Megane item. A rear diffuser saves another 2.3kg, while the Akrapovic titanium exhaust peeking out from within drops another seven. A redesigned rear suspension layout (more on that later) trims 32kg. An easy 25kg was lost by ditching the back seats, while the wonderful fixed back, alcantara-trimmed Sabelt items up front cut 14kg between them. The rear wiper and motor have gone (saving 3kg) the boot carpet is redesigned (1.3kg) and there’s the option of a lightweight battery (4kg).

Then things start to get really nerdy. The side windows are made from thinner glass to save 1kg. There’s no adaptive cruise control tech to be found, but the Trophy-R uses the Renault badge from the cars that do have it, as that saves a couple of grammes. See the smaller seven-inch infotainment screen, not the fancier 8.7 inch unit of usual top spec Meganes? That’s 230g saved. Best leave the four pack of Mars bars at home otherwise you’ll undo all of Renault’s hard work.

The highlight of the upgrades is undoubtedly the wheels. The optional carbon fibre items not only look spectacular, but also slash four kilos of unsprung mass per corner. Choose those and you get to keep the standard 19-inch red ‘Fuji’ items, so you can stick the carbon rims on for a trackday, before driving home on the other set. The wheels house huge brakes, with carbon discs optional for the front: the brembo items each trim off another kilo. The carbon wheels and brakes were used to set those record-breaking lap times.

Beyond the weight loss, Renault has worked extensively on the suspension, with specs reading more like those of a supercar than a family hatch. Dampers are adjustable all round, allowing the driver to both tweak their response and adjust the ride height by up to 16mm. The front features lighter springs, too, and front camber has increased. At the back, the Megane Trophy’s rear wheel steering setup - something that knocks confidence during hard driving - has been ditched to make way for a rear axle developed specially for the Trophy-R.

The result of all of these changes is staggering. That car’s composure is almost unshakeable; mid corner bumps don’t phase it in the slightest, and while the huge limits of grip mean that it won’t engage in the sort of hilarious oversteer antics possible in the Civic Type R, lift the throttle mid-corner - or trail the brakes towards the apex - and the nose dives in keenly. On corner exit, it’s the turn of the limited slip differential to work its magic. Load the car up to its limits, ask for some throttle and the diff hauls the car’s line even tighter. The steering is lovely too: both in terms of weighting and the feedback, while the carbon brakes are savagely powerful with incredible bite.

The engine feels stronger than ever. The combination of grippier tyres and a lower kerb weight has dropped the Megane’s 0-62mph time by three tenths to 5.4 seconds. Top speed is up 1mph to 163mph. If only it was matched to a better gearbox: the six-speed manual is carried over unchanged from the regular Megane, and suffers from the same obstructive, clunky shift. 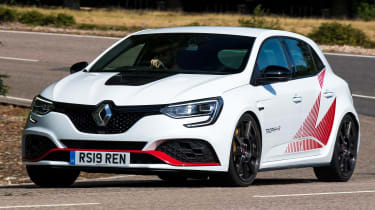 All of this means that, in pretty much any situation on a public road, you’ll get nowhere near the limits of what it can do. But that doesn’t mean that road driving feels dull: the steering is alive in your hands, while the balance and lack of inertia can be felt at sedate speeds. The ride is very firm, even in its relaxed settings, but it has a greater sophistication than in the (also firm) standard car. It wriggles over the tiniest road imperfections, but larger bumps don’t thud through the chassis as they do in the standard car.

Renault is building just 500 examples of the Trophy-R, with just 32 coming to the UK. Despite this, and the amazing results of Renault Sport’s work, the £51,140 asking price will appear utterly bonkers.

And that’s before options. The carbon wheels, wonderful though they are, cost £12,000. The carbon brakes cost another £9,000, too, though that fact will be moot for most: only thirty carbon-braked cars will be produced, with just two of them allocated for the UK. In reality, then, you’re looking at £63,140 for a Trophy R in its perfect spec. Is it worth it? Absolutely.