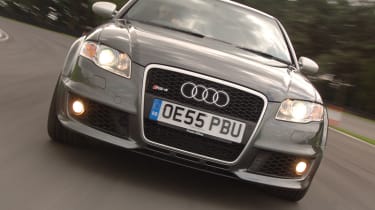 Driving The Audi feels special as soon as you press the start button. A great engine is at the heart of this car’s appeal. It fires into life with a delicious V8 rumble, and sounds good on the move as well – especially when you hit the Sport button. This sharpens throttle response, improves the exhaust note and also squeezes the side bolsters of the seat more snugly! However, even without it, the RS4 delivers muscular low-down grunt; its 430Nm torque figure is substantial. A power output of 414bhp puts it on a level footing with BMW’s M3. And while the Audi doesn’t have the mechanical hard edge of the BMW, we think it sounds just as good. It has a slick six-speed manual gearbox too, with an inertia-free drivetrain. The Quattro transmission gives excellent traction, of course, and also helps the RS4 be second only to the R8 in all-time driver’s cars from Audi. Through corners, there’s a suppleness to the suspension (fitted with an active set-up as standard) that does translate into a little body movement. There’s a touch of understeer near the limit too – but don’t be mistaken, it’s always incredibly involving to drive. Point-to-point pace on snaking B-roads is fearsome. Yet all this ability is also coupled to effortless day-to-day manners, too. The RS4 strikes the perfect compromise.

Marketplace The stunning R8 supercar isn’t the only option for Audi buyers who want breathtaking performance – the RS4 sets plenty of pulses racing, too. For starters, it looks great. The A4 range-topper gets blistered wheelarches, a 30mm lower stance and a much wider track. Add in huge 19-inch alloys, as well as subtle detailing such as the chrome mirrors and a more aggressive spoiler lip, and the car looks squat and purposeful from every angle. This extends to the Avant estate that’s also available alongside the saloon… and there’s even a Cabriolet version for high-performance sun-seekers! As for rivals, this car’s arch-rival is the BMW M3, also boasting a V8 engine. The Mercedes C 63 AMG is V8-equipped too, and is both more powerful and more expensive. Alternatively, if you want a cheaper option, why not check out Vauxhall’s muscle car, the VXR8?

Owning Up front, the RS4’s driving position is spot-on, and the superb flat-bottomed steering wheel has a wide range of adjustment. The Recaro sports seats are comfortable and supportive, too, while the six-seed manual gearlever is topped by a neat perforated trim that is great to hold. Admittedly, the dashboard is starting to appear dated, but standard leather compensates – and build quality really is first-class. Rear passengers fare a little worse, because the standard A4 bodyshell isn’t the largest, while those beefy Recaros also eat into the space. Fuel economy is also fearsome. We averaged only 17.4mpg during testing, and even the combined average is only 20.9mpg. Servicing won’t be cheap either – but then, so in-demand is the RS4, retained values are brilliant. It holds on to nearly 60 per cent of its list price after three years. Then again, so it should; that list price looks high when you consider essentials such as sat nav remain on the options list.