The new Audi RS 4 Avant is a great fast all-rounder that’s easy to live with, but for buyers looking for engaging driver involvement, they might want to look elsewhere. 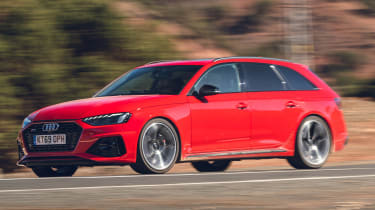 The updated Audi RS 4 builds on the strengths of the old one – incredible pace, strong grip and excellent refinement – and throws in improved infotainment technology and better (on-paper) fuel economy. As a fast all-rounder that’s easy to live with, then, it’s a very strong contender, but buyers looking for the last word in driver involvement might still be left feeling a little cold.

This is the new Audi RS 4 Avant. As the defining estate car of the past 20 years, little else on the road has managed to deliver the same mix of pace, comfort and practicality. And now, there’s an update for 2020.

The changes fall in line with the revisions applied to lesser A4 models last year. From the outside, there are some subtle styling upgrades; the headlight graphics gain a more modern look, while the air intakes in the front bumper are ever-so-slightly reshaped. The most obvious change is the three slim fake air vents on the bonnet’s leading edge, mimicking those on the iconic ur-Quattro.

New tail-lights freshen up the rear, and of the eight paint colours on offer, Turbo Blue and Tango Red are new to the RS 4 (they’ve been on the S4 since the 2019 facelift). There are also two new wheel designs; the 19-inch rims are standard, 20-inch alloys are optional.

Step over the illuminated door sills and you’re greeted by a cabin that’s much the same as before and is a lovely place to sit. There are a couple of tech upgrades, though; a new 10.1-inch infotainment display sits on top of the dash, and the old car’s click wheel has been ditched in favour of a touchscreen. The 12.3-inch Virtual Cockpit instrument panel gets what Audi Sport calls the ‘RS monitor’. This menu gives a real-time overview of vital stats: tyre pressure, temperatures, G-forces, lap times, power and torque, plus a gearshift indicator.

There’s also a set of aluminium shift paddles behind the wheel, which are much more tactile than the cheap-feeling plastic items in the previous model. Further back, it’s much the same as before, including a roomy 495-litre boot. 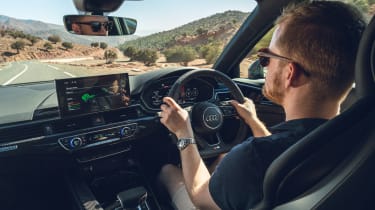 While the headline figures of the RS 4’s 2.9-litre twin-turbo V6 remains unchanged – 444bhp and 600Nm – Audi has tweaked the engine software to deliver a broader torque curve. You’d probably need to drive the two cars back to back to appreciate any noticeable improvement, but the RS 4 remains devastatingly quick in a straight line. Thanks to the quattro four-wheel-drive set-up, the 0-62mph dash takes 4.1 seconds.

Despite all that shove, the 4WD system delivers staggering traction. If you find you’re going a little faster than intended, the steel brake discs (375mm front, 330mm rear) cut the speed at an astonishing rate. Optional carbon-ceramic front brake discs save 8kg of unsprung mass. During hard cornering, the brakes on the inside wheels nip slightly to help the car cling to its line more doggedly.

A dynamic steering system, meanwhile, can weight up at speed to give a more confidence-inspiring feel, yet increases assistance at lower speeds to make town driving easy. Optional adaptive dampers let the driver control the rate of the suspension response, and in Dynamic mode body roll is tightened up noticeably. 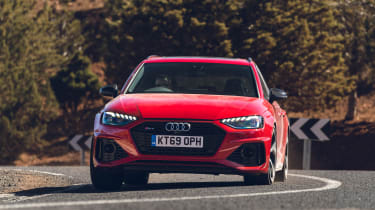 Hoof the accelerator out of a tight hairpin and the tail slides slightly, but for the most part the RS 4’s balance remains very neutral. The centre differential plays its part here; by default, it sends up to 60 per cent of torque to the back wheels, and as much as 85 per cent can go to the rear in extreme situations. For the most part, the Audi is set up to deliver its performance in the most crushingly efficient way.

Whether that’s a good attribute for a performance car to have is another matter. Yes, it’s hugely quick, but it’s not as playful as a Mercedes C 63 S or an Alfa Romeo Giulia Quadrifoglio. The same goes for the engine, which lacks the character of more tuneful rivals. The RS 4 driver will almost certainly arrive at their destination first, yet those driving the other two will be wearing bigger smiles.

But the new Audi is undoubtedly the easiest of its rivals to live with. Switch the Drive Mode Select into Comfort and it feels just as relaxing and as cosseting to drive as any other A4 – even on the optional 20-inch alloys. Those engine mapping changes don’t just stop at the torque curve, either, so the latest RS 4 is more fuel-efficient than the previous model, achieving 28.8mpg on the WLTP testing programme. 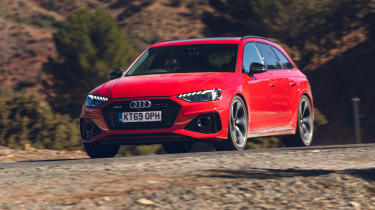 Prices for the updated Audi RS 4 start at £64,400. There are upgrade packages available, too; the £71,000 Carbon edition gets 20-inch alloys, carbon-fibre dashboard inlays, plus black detailing on the grille, window trims and door mirror caps.

The Vorsprung Edition brings a top speed increase (up from 155mph to 174mph), adaptive dampers, a panoramic sunroof and a Bang & Olufsen stereo system, which comes to £82,200. Then there’s the limited-run Bronze Edition; just 25 examples of this £82,395 model will come to the UK, and among other things, they will feature bronze-coloured 20-inch wheels, matching stitching on the seats and steering wheel, and the RS Sports exhaust system.