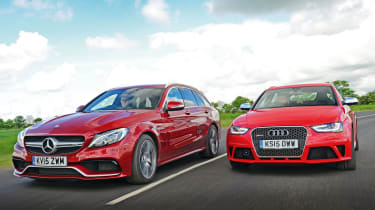 Things are hotting up in the fast estate class, with the arrival of the all-new Mercedes-AMG C 63. Featuring the same muscular twin-turbo engine as the brand’s GT sports car, the newcomer aims to raise the performance bar set by its predecessor.

There’s more to the C 63 than a thumping great engine and blistering acceleration, though. For starters, AMG’s engineers have worked hard to make sure the car is as impressive in corners as it is in a straight line. 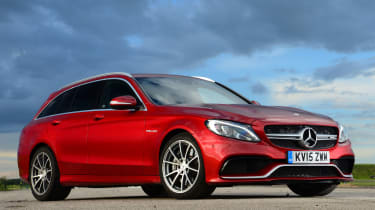 Plus, because the C 63 is based on the latest C-Class, it looks great and boasts one of the slickest interiors around. And in Estate guise (you can also get a traditional saloon), it’s spacious and versatile. 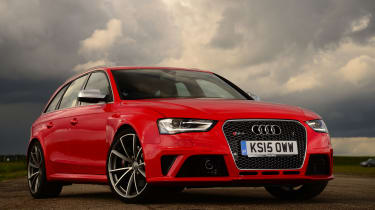 Setting the standard for the Mercedes is the Audi RS4, which blends ferocious performance with all-weather four-wheel-drive composure. It’s also beautifully built, well equipped and, crucially, costs nearly £5,000 less to buy. So, which of our warp factor wagons wins this space race?

Click the links above to read individual reviews of the performance estates, and scroll down to see which wins... 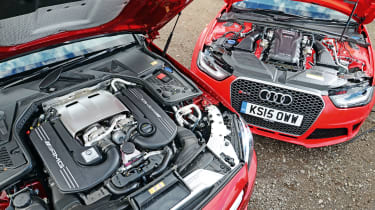 The C 63’s powerplant is based on the same 4.0-litre V8 as the AMG GT uses, with twin-turbos mounted in the ‘V’ of the engine. However, the GT’s race-bred dry sump oil system is replaced by a more conventional wet sump. With its natural aspiration, the RS4 can’t match the AMG for power and efficiency, but the 4.2-litre does rev to 8,500rpm. 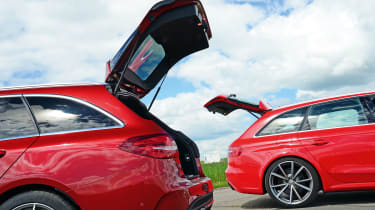 Both our contenders feature powered tailgates and the same 490-litre boot capacity with the rear seats in place. The C 63 has more space with the back bench folded and boasts handy hooks for shopping. However, the Audi hits back with its £155 optional sliding rail load divider system. 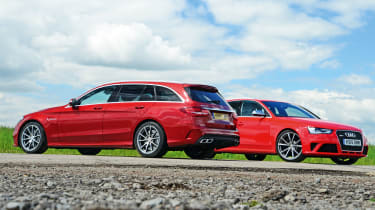 Optional sports exhausts are available on both cars. The AMG’s £1,000 system is activated by a button on the dash that opens valves for increased volume at low revs. The Audi’s set-up costs £890 and is a passive system with no driver override. 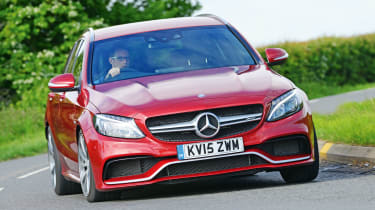 If you’re after power, performance, prestige and practicality, look no further than the mighty Mercedes-AMG C 63. Thanks to its bombastic new V8 engine and sharp handling, it’s thrilling to drive whatever the journey, while the classy looks, upmarket cabin and spacious boot make it easy to live with. And although it’s expensive to buy, strong residuals mean you’ll lose less in the long run. 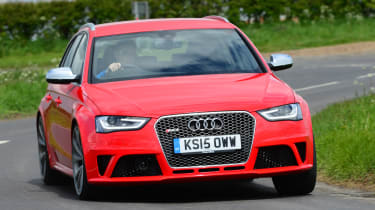 It takes the runners-up spot here, but the RS4 is still a hugely capable and desirable car. At the heart of its appeal is the screaming V8 engine and the all-weather security of its quattro four-wheel drive. It also looks great and features a surprisingly versatile cabin. Yet it’s even more costly to run than the C 63, plus it can’t match its rival’s performance and engaging handling. 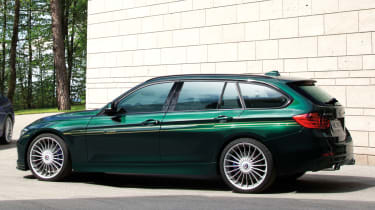 There’s no BMW M3 estate, so the next best thing is the Alpina B3 Touring. Its twin-turbo straight-six boasts 600Nm of torque and delivers 0-62mph in 4.3 seconds. It strikes a perfect balance between agility and cruising comfort. 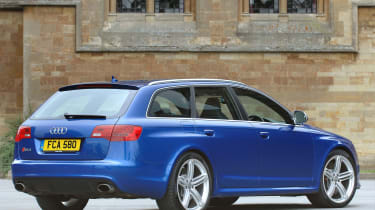