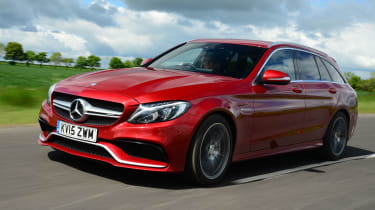 The Mercedes-AMG C 63 Estate is the performance C-Class for those looking to take the dog and luggage along for the ride as well. It uses the same 4.0-litre twin-turbo V8 engine from the C 63 saloon (and AMG GT sports car) and comes in both 'entry-level' 470bhp guise or 503bhp S form.

Along with the saloon, the estate features uprated suspension, muscular looks, plenty of thrills and a fantastic exhaust note thanks to that howling engine.

With prices kicking off at just over £60,000 it's not cheap, but the C 63 Estate doesn't have too many rivals to be competing with. Its main competitor is the four-wheel drive Audi RS4, which could be seen as a different beast altogether because of this setu-up, compared to the Merc's rear-wheel drive layout.

While AMG has taken a modest approach to the exterior of the new C 63, engineers have gone to town on the newcomer’s underpinnings. Not only is the engine brand new, but the transmission has been heavily revised and the steering and suspension have received thorough overhauls.

Of course, at the heart of any AMG model is its engine, and the C 63 is no exception. The old car’s naturally aspirated 6.2-litre V8 has been ditched in favour of a 4.0-litre twin-turbo that’s both more powerful and efficient. Based on the unit used in the AMG GT, it features wet rather than dry sump lubrication and pumps out 470bhp and a thumping 650Nm of torque. It’s paired with a revised version of the old car’s seven-speed twin-clutch gearbox that drives the rear wheels.

As you’d expect, performance is explosive. Thanks to the addition of launch control, the car blasted from 0-60mph in just 4.0 seconds in our tests. However, it was during our in-gear tests that the Mercedes really stretched itself, using its muscular mid-range torque to devastating effect. Plus, this pulverising performance is matched by the car’s bellowing soundtrack.

From a deep burble at idle through to a spine-tingling roar as the rev counter moves towards the red line, the engine always raises a smile. The revised seven-speed auto is smoother and sharper than before, too. 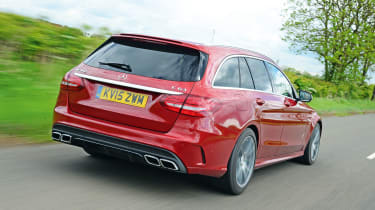 A wider front track, stiffer springs and dampers, faster steering and uprated brakes mean the C 63 is as accomplished in corners as it is on straights. The meaty steering responds quickly and there’s lots of front-end grip, allowing you to place the car accurately and with confidence.

Even in wet conditions, the traction control quickly eliminates wheelspin. Turn the electronic aids off, however, and you’ll need a gentle right foot if you want to avoid lurid powerslides. Like the standard C-Class, the C 63 benefits from low levels of wind and road noise, while the raucous V8 settles down to a background hum at a cruise. Yet while the AMG benefits from cast-iron high-speed body control, the trade-off is a relentlessly firm low speed ride.

At £61,260, the AMG isn't cheap. And its more generous kit tally isn’t enough to offset the price difference between it and the cheaper Audi RS4. However, thanks to its impressively low CO2 emissions of 196g/km, the Mercedes will cost business users a similar amount in Benefit in Kind tax, while private buyers can take heart in the impressive predicted residuals of 50.9 per cent, which help ensure the AMG is worth over £6,000 more than the RS4 after three years.

The standard C-Class is one of the most handsome family cars you can buy, particularly in Estate guise. So, it’s no surprise to find AMG’s designers have taken a low-key approach to the styling of the C 63.

At a glance, you could easily mistake it for a run-of-the-mill C-Class, but look more closely, and you’ll spot the car’s more hunkered and purposeful stance and its neatly integrated bodykit. At the front is a deeper front bumper that features the same gaping air vents as the larger E 63, a pair of power bulges in the bonnet and subtly flared wheelarches attached to wings that display V8 BiTurbo badges. 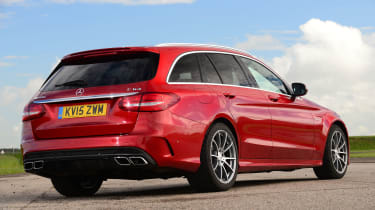 Move around to the rear, and the quad exhausts leave you in no doubt of the performance potential. Surprisingly low-key 18-inch alloy wheels are fitted as standard, but buyers can upgrade to the larger 19-inch alloys used on the S version for an extra £595.

Further visual enhancements include the £3,370 Carbon Fibre Pack, which adds lightweight material to the front splitter, sill extensions and rear diffuser, plus the £585 Night Pack, which comprises several pieces of gloss-black exterior trim. 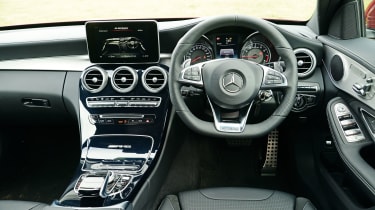 Inside, the C 63 benefits from a number of AMG upgrades, such as bespoke instruments, a chunky, flat-bottomed steering wheel, figure-hugging front sports seats and a stainless steel finish for the pedals. Elsewhere, it’s standard C-Clas

s, which means you benefit from a slickly designed dashboard, top-notch materials and first-rate fit and finish.

And as befits a car costing over £60,000, you get a decent haul of standard kit, too. An intuitive sat-nav system together with an 8.4-inch screen, dual-zone climate control, a reversing camera, leather seat trim and DAB radio are all included.

This Mercedes is an estate as well as thrilling driving machine, so practicality is as important as performance. With the rear seats in place, 490 litres of space is on offer in the boot, but folding the AMG’s 40:20:40 rear bench flat using the remote switches frees up 1,510 litres. 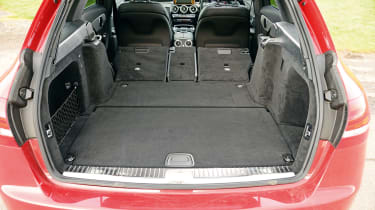 The Mercedes’ boot also benefits from a number of lashing eyes, shopping bag hooks and a 12V power supply; but there’s no option to add a load rail organising system.

Elsewhere, there’s decent head and legroom for rear seat passengers – although the transmission tunnel is intrusive – and plenty of handy storage.

Mercedes has always had a strong reputation for durability and reliability, despite a dip in form a decade or so ago. In recent years, the brand has risen back to its best, and that’s reflected in its decent 11th-place finish in our Driver Power 2015 satisfaction survey.

The latest C-Class was also rated 41st overall and was the fourth best compact executive model in the same poll. Plus, much of the AMG is handmade, which should help with longevity. 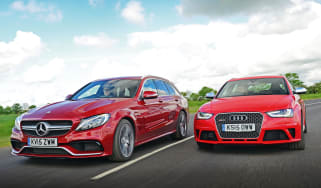 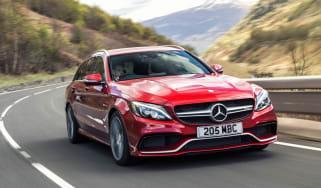 Mercedes extends its line of super sports estates with the new C63 by AMG. Can it out muscle the BMW and Audi alternatives?
Mercedes-AMG GT S and C 63 confirmed as F1 2015 safety cars 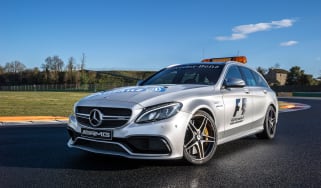 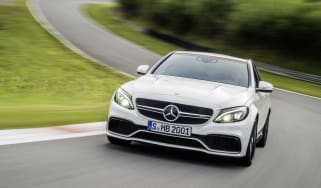 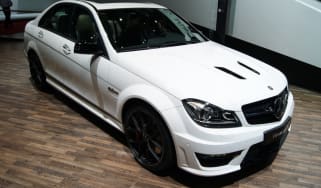 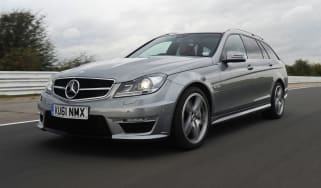