Mercedes extends its line of super sports estates with the new C63 by AMG. Can it out muscle the BMW and Audi alternatives? 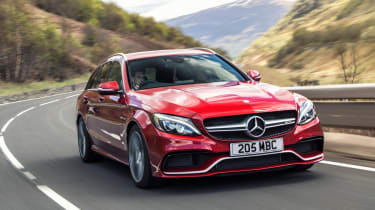 It's the driving experience that counts most in a car like this, and in just about every dimension you can think of, the C63 estate doesn't disappoint. It's a sensational car to drive that just so happens to boast a huge dose of practicality into the bargain. If ever a car could be worth sixty thousand pounds, this is it.

We've already driven and been mostly blown away by the new Mercedes-AMG C63. But that was on another day and, more importantly, in another country, on roads that are very different from the ones we have here in the UK.

So having now driven it on home soil as well, the crunch questions are; is its ride quality flexible enough to work on a UK road? Is its new turbocharged V8 engine a sincere replacement for the old thumper of an atmospheric V8 that powered the previous C63 with such gusto? And is it really worth the premium that Mercedes-AMG is attempting to charge compared with rivals from Audi (RS4/5) and BMW (M3/4)?

The good news is; the C63 backs up its lofty price tag with a fairly dazzling array of not just on-paper appeal but on-road ability as well. Its new 3982cc twin-turbo petrol engine produces more power and torque than any of its closest rivals - 469bhp and 649Nm, or 504bhp and 700Nm if you opt for the pricier S version. 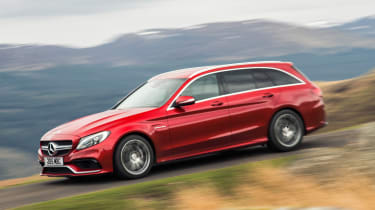 But the even better news is that, despite being turbocharged, this new V8 engine is still bursting with personality and suffers from virtually no lag whatsoever - to a point where if you weren't told that it is turbocharged, you probably wouldn't guess. And the ride quality, indeed the entire chassis, steering and suspension system, also works beautifully back here in the UK as well.

It's also fast with a capital F, the new C63, Mercedes quoting a 0-62mph time of just 4.2sec even for the regular estate model. Go for the S saloon and that drops to 4sec dead with zero to 100mph coming up in well below 10sec. All versions are restricted to the inevitable 155mph top speed.

This estate model is big on practicality, too. With 490 litres of space with the seats up, it matches its Audi RS4 Avant rival - but fold the rear seats down and that expands to an Audi-beating 1,510 litres.

As you'd expect from any new AMG, there are numerous different set up alternatives that can be selected manually via the car's dynamic drive program. But in this instance you can tailor the programs individually to suit your needs, or the terrain beneath. So you can select any combination you fancy when it comes to the car's throttle, steering, gear change and ESP system responses. No two C63's will be the same, in theory, when on the move. 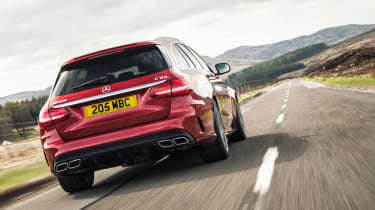 The gearbox is an uprated version of the previous C63's not-so-brilliant 7-speed MCT (multi clutch transmission), and in this instance it has been much improved, with sharper downshifts and creamy smooth upshifts (or thumping hard ones if you select Sport +. Either way, it works far better than before.

One slight disappointment is the car's kerb weight. At 1785kg for the estate model you see here, or 1715kg for the saloon, the C63 is almost 200kg heavier than a BMW M3. This has obvious knock-on effects not only when it comes to pure agility - the C63 definitely feels like a bigger machine to muscle about on a UK road - but also on emissions, fuel consumption and even tyre wear in the fullness of time.

Then again, the C63 does feel like a bigger and more grown up kind of car compared with the latest M3, period. Its cabin is both richly appointed, especially so for a Mercedes, and has an extra whiff of maturity to it beside the racier-feeling M3. The moment you climb inside the C63, you know where your money is being spent.