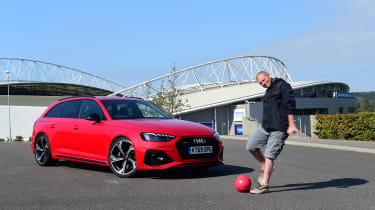 I’ve really gelled with this new Audi RS 4. I’ve come to love what it’s great at, which is many things. It’s fast, looks superb, and is high in quality and refined. I just wish the ride and range were better.

The latest Audi RS 4 really kicks, even though it may look – and go – quite a lot like the previous model. Subtle styling changes have made this 2020 edition look meaner, yet cleaner than ever. Plus our car comes on Audi Sport’s deeply sexy but pricey £2,000 20-inch Anthracite Black wheels. I actually think they’re worth it. They’re usually the first things people comment on whenever they see the RS 4, and the rest of the car is hardly understated.

As standard, the RS 4 costs £64,625, but with all the upgrades (B&O sound system, RS exhaust, digitised RS Sport suspension, panoramic roof, carbon inlays – you name it, the RS 4 pretty much has it) the price of ‘my’ car rises to £81,625. Yet having done a few thousand miles in it, on all sorts of roads and in all kinds of weather and at various speeds, I still think it’s a lot of car for the money. Even at the thick end of 82 grand.

For starters, I love the way it looks. It’s aggressive, but dignified and classy at the same time. I like how it doesn’t actually feel especially like a wagon to drive, either.

Inside, the RS 4 is largely unchanged from before, and none the worse for that. The digital display is great, and now you get two RS mode buttons on the steering wheel, the parameters of which you set by selecting which modes you want for the engine, gearbox, dampers, steering and exhaust.

I’m also coming to appreciate just what a high-quality piece of kit the RS 4 is inside, merely as a car to sit in and interact with. All the buttons and switches have a seriously high-end feel to them, the optional carbon inserts lend it an extra bit of exclusivity, and the seats are excellent: super-comfortable on long journeys, but also mega-supportive when you’re really going for it. Which is something I find increasingly hard to resist, what with the roads still being relatively quiet and the RS 4’s naturally playful nature.

Fire it up and the twin-turbo V6 makes a strong, yet not especially extrovert sound. You can tell it’s potent, but it doesn’t shout that message from the rooftops like some cars with 444bhp and 600Nm do, even if you put the exhaust into its noisier mode. But as soon as you start to move, the RS 4 feels like a serious driving machine. 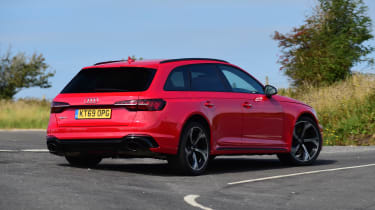 I’m not convinced about its low-speed ride, certainly not around my Hove home, where the roads are notoriously poorly surfaced. But on open roads it flows more freely – and comfortably – and when you put your foot down properly, boy does it go.

The hit of acceleration in any of the first six gears is always surprising, even though I’ve experienced it 100 times or more.

By and large, the RS 4 also now has the handling and steering – and certainly the braking power – to match. No, the Audi still doesn’t quite exude the same detail through its steering and chassis as a Mercedes-AMG C63 S Estate, as I found when conducting a twin test between the two models for sister magazine evo recently. But in isolation, the RS 4 is an extremely special car to drive; one that’s very rapid, very capable dynamically, yet surprisingly civilised. Plus its estate-only body means it’s extremely practical, too.

My only real gripe with the car is its fuel consumption. Fair enough, I may be a touch more heavy-footed than some, but then you don’t buy an RS 4 just to pootle about in, and so far my average economy works out at only 24.1mpg. This has a knock-on effect of compromising the range, too, at not much more than 310 miles. But otherwise, I’m a massive fan of the Tango Red Audi RS 4.