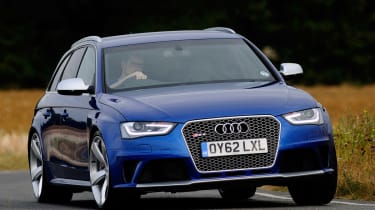 The Audi RS4 Avant is a high performance estate that mixes masses of practicality with supercar performance. BMW doesn’t make an estate version of its M3, so the 2015 Mercedes C63 AMG Estate is the RS4’s closest rival. Unlike the Mercedes, however, the Audi is powered by a non-turbo engine – it’s a 444bhp 4.2-litre V8 that drives all four wheels through Audi's famous quattro transmission, with a seven-speed twin-clutch gearbox.

Unlike previous generations of the RS4, the 2012 version was only available in estate form, as Audi reckons buyers of the old saloon have migrated to the two-door RS5 Coupe instead.

Topping the A4 range, the RS4 gets enormous brakes, supportive sports bucket seats and a fantastic soundtrack from the V8 engine. Add in enough space for the family and all their luggage, and you've got a very capable and desirable car.

While most brands have embraced turbocharging to boost performance, Audi has stuck with natural aspiration for the RS4, using the 4.2-litre V8 from its R8 sports car. Yet even though the unit’s pedigree is unrivalled, it can’t match the Mercedes C 63’s outright firepower.

Newer rivals boast more power and torque thanks to their downsized and turbocharged engines, but the RS4 is still enormously fast, accelerating from 0-62mph in 4.7 seconds. That’s only 0.1 seconds slower than Audi’s R8 V8 supercar, and with the potential to hit over 170mph if you pay extra to have the speed limiter removed, the RS4 is more than fast enough. 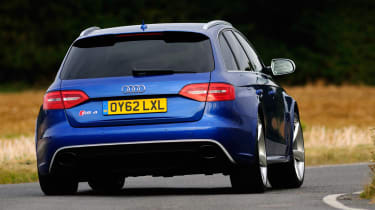 The Audi’s high-revving V8 engine emits a glorious, metallic howl when extended, while its slick seven-speed twin-clutch gearbox is silky smooth in auto mode and responds crisply and quickly to the steering wheel-mounted shift paddles when you take manual control.

With its widened track, four-wheel-drive transmission and steamroller-wide 265 section tyres, the RS4 always feels sure-footed and planted through a series of corners. It’s not quite as involving as its Mercedes rival, but it’s far closer than you’d expect. Part of its driver appeal is down to the clever Sports rear differential, which can send torque to the outside rear wheel to sharpen turn-in and reduce understeer. 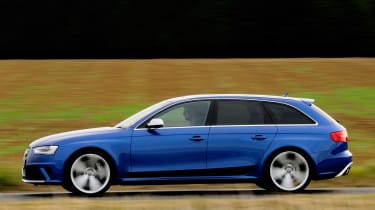 You can also tune the steering weight, throttle response and gearshift points using the Drive Select function – although in Dynamic mode, the steering is too heavy and lifeless. Yet the RS4’s party trick is that it lets you use all of this performance when the weather turns nasty. Thanks to the permanent all-wheel-drive set-up, it can fire out of slow corners under full power in the wet or dry.

Plus, it's plenty comfortable thanks to its low noise levels and slightly softer low-speed ride. It also benefits from a supremely comfortable driving position.

This is a super-estate, not a fleet-friendly diesel, so you should expect the RS4 to be very expensive to run. Audi claims 26.4mpg but if you rev that big V8 engine to the redline all the time, you won't get anywhere near that – expect mid to late teens if you use all of the performance the RS4 serves up. 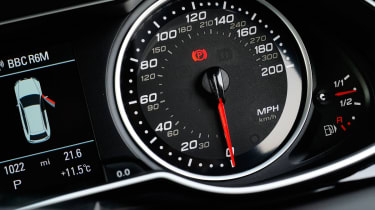 Consumable parts like tyres will also be expensive, although the car's quattro drivetrain does at least mean the enormous power is shared more equally than in its rear-wheel drive rivals. Servicing will be pricey, as will insurance on this £56,545 express estate, but RS4s have always been in strong demand on the used market so the Audi should hold its value well.

Audi makes no bones about the RS4’s performance potential. The standard A4 is handsome yet a little bland, so the brand’s designers have gone to town on the flagship.

The heavily blistered wheelarches are nod to the legendary original Quattro of the eighties, while the gaping front grille, deeper bumpers, rear diffuser and huge oval twin tailpipes give the Audi huge presence. 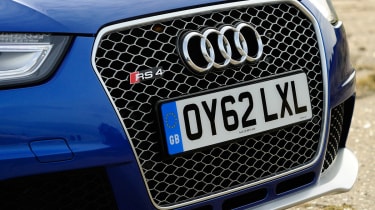 Large 19-inch alloys are fitted as standard, but 20-inch rims are available from £1,250. Red brake calipers cost £430, plus the £465 Black Styling Pack includes gloss-black trim for the front grille, window surrounds and roof rails. You can even have the engine cover finished in carbon fibre for an extra £440.

Climb inside, and it’s clear the RS4 is starting to show its age. There’s nothing wrong with the impeccable quality or top-notch materials, but the A4-derived dashboard looks a little dated, while the standard MMI infotainment system isn’t as slick as Mercedes’ COMAND set-up. 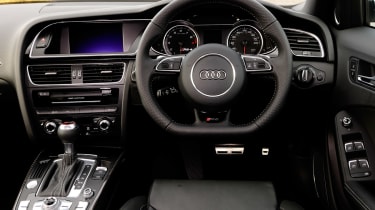 Still, the addition of a flat-bottomed steering wheel, high-backed front seats and a smattering of RS4 logos helps give the interior a lift. You also get desirable kit, such as sat-nav, three-zone climate control, a 10-speaker sound system and Bluetooth connectivity.

The A4 Avant that underpins the RS4 is getting on a bit now, but it’s still a practical design. The large tailgate opens to reveal a low loading lip and a well shaped 490-litre capacity. There are no levers in the boot to lower the 60:40-split rear bench, but with the seats folded flat, you get a decent 1,430 litres of space. There are no shopping bag hooks, yet you can add a neat load securing rail system for £155. 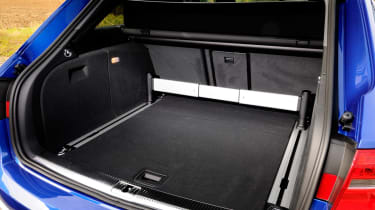 Rear occupants get a decent amount of space, although the Audi’s high-backed front seats obscure the view forward. Still, there’s no shortage of storage space, with deep door bins, a large centre console cubby and plenty of cup-holders.

Despite being a performance car, it's quite comfortable. Of course, put the suspension in Dynamic mode and you'll feel every lump and bump, but select the Comfort setting and the RS4 soaks up imperfections pretty well, even on the optional 20-inch alloys. Factor in relaxing motorway manners and this is certainly a fast car that will eat long distances with ease. 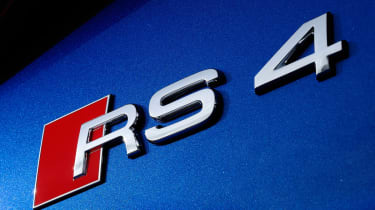 The RS4 has been around for three years now, while the standard A4 hit showrooms back in 2008, so any mechanical niggles should have been sorted out. And although the current A4 didn’t feature in our Driver Power 2015 satisfaction survey, Audi itself finished a solid 13th overall.

However, if you do experience any issues, you can’t expect exemplary service from the brand’s garages, which finished a disappointing 26th out of 32 in our most recent dealer poll.

Audi has a strong tradition of safety innovation, and with its six airbags, stability control, uprated brakes and four-wheel drive, the RS4 is a confidence-inspiring companion. The £950 Driver Assistance Pack adds lane keep assist, adaptive cruise control and low-speed collision warning, while rear side airbags can be added for £255.