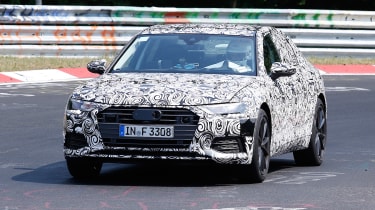 Audi’s all-new A6 doesn’t arrive until next year, and even before that we’ll see the swoopy new A7, but engineers are already putting the finishing touches to the racy S6 saloon.

• The best executive cars on the market

Spied undergoing development testing at the Nurburgring, the S6 features a modest exterior revamps over the standard versions of the saloon spied previously. If it wasn’t for the four-tail pipes poking out the rear end you could mistake it for a regular A6. 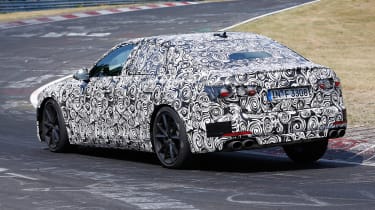 Look a little closer and you can also see beefier brakes hiding behind larger alloys wheels wrapped in lower profile tyres. The shots don’t really give much away in terms of styling, but Audi has claimed that it will move away from its ‘Russian doll’ styling strategy, to give models more individual character. It’s a move brought in by new design boss Marc Lichte.

Under the bonnet the S6 is likely to use the 3.0-litre V6 TFSI engine used across the current S5 range. Audi may chose to tweak the engine to deliver more grunt in the heavier S6, upping power from 349bhp and 500Nm of torque, possibly with the addition of the new electric compressor made possible by the 48-volt electric system the A6 will adopt.

The more potent RS6 which should follow around 12 months after the regular A6 arrives, will use the new but smaller capacity 2.9-litre twin-turbo V6.

What do you think of the new S6 as seen here? Let us know in the comments…