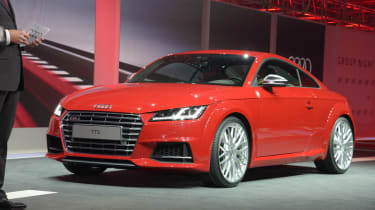 Sixteen years after the first Audi TT was revealed, Audi has unveiled its third-generation sports car at the Geneva Motor Show – and thanks to its lightweight construction, it weighs 140kg less than the iconic original. The car is due on sale this autumn with a price of around £28,000.

The standard TT and sporty TTS starred on Audi’s stand, with the regular car offering engines shared with VW’s hot Golfs. The 181bhp 2.0 TDI diesel is from the GTD and the 227bhp 2.0 TFSI petrol from the GTI Performance Pack. A 306bhp version of the 2.0 TFSI powers the TTS.

Under the skin, the new TT sits on the VW Group’s MQB platform – shared with the VW Golf and Audi A3. With aluminium and ultra-high-strength steels in the construction the new car is up to 50kg lighter than the MkII TT. That brings some big performance and economy gains.

A manual, front-drive version takes six seconds flat and the new TTS 4.7 seconds – faster than a Porsche Cayman S. MacPherson strut front and multi-link rear suspension is fitted, with magnetic adaptive dampers standard on the TTS and an option on all other cars.

Also fitted is new progressive electro-mechanical steering – this aims to give a more agile feel, and allows Audi to fit self-parking and active lane assist. A new stability control system brakes the inside wheel in corners, has a sport mode that offers a limited amount of wheel slip and can be switched off totally.

Despite the advances under the skin, the TT has a familiar design – albeit modernised by a large, angular grille and hi-tech lights (xenons as standard; LEDs optional). Viewed from every angle, the TT retains the classic coupe shape but features styling cues borrowed from the R8 supercar and Allroad Shooting Brake concept.

But the interior has been thoroughly revised. Not only is there a bit more space – the wheelbase is 37mm longer and the boot 13 litres bigger, at 305 litres – the cabin layout is far cleaner, too.

The heater controls are integrated into the vents and most other functions are controlled through the MMI Touch scroll wheel. There’s not even a central display – everything is laid out ahead of the driver on a TFT Virtual Cockpit. Audi hasn’t confirmed a release date or price for the TT, but it’s expected in autumn for around £28,000.

Welcome to our Geneva Motor Show hub page, scroll down for all our Geneva content...
Audi TT review