Audi TT Ultra with diesel engine is expected to be big seller, and we try it in UK 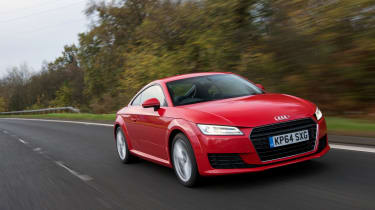 It'd be easy to give the Audi TT Ultra four stars, saying a diesel doesn’t belong in a true sports car. But that would do the Audi an injustice, as this not only makes a strong case for itself compared to the punchy petrols, but it also delivers true thrills. If you value mpg and fun, this is the sports car for you.

We’re already big fans of the new Audi TT – with its blend of stylish looks and improved driving dynamics, this fashionable car has already earned top marks in our book. Although we’ve swooned over the petrol-powered TTs, we haven’t been able to get behind the wheel of the diesel version on UK roads – until now.

And it’s a good job we did, as this will be the big seller on these shores. Brits already buy more TTs than drivers in any other country in Europe, and the ones we buy most of are diesel-powered.

Audi has served up a tempting package in the new, third-generation TT. Under the curvy bonnet lies a 2.0-litre TDI diesel – just like the engine you’ll find in a host of other Audis. While this car produces 182bhp, has a top speed of 150mph and covers 0-62mph in a shade over seven seconds, Audi says it’ll return an eye-catching 67.3mpg and emit only 110g/km of CO2. And don’t think that fuel economy figure is pure make believe, as we managed nearly 60mpg on our test route. 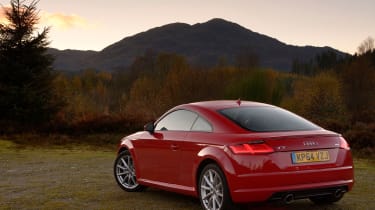 Show the TT Ultra a corner and, while there’s a little understeer, there’s nothing evident enough to mark this car down over the petrol versions. That’s because it’s all backed up by a great chassis that makes the diesel TT a credible sports car. For a diesel it even sounds throaty under hard acceleration, too.

Inside, the TT is a symphony of great design. And while there’s hardly any space in the back, those up front have plenty of room. Plus, there’s a decent-sized boot, with 712 litres of space when the seats are folded flat.

The TT 2.0 TDI Ultra makes a strong case for itself, then, and looks set to continue Britain’s love affair with Audi’s diesel-engined sports car.