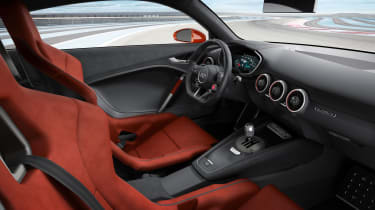 Not to be outdone by Skoda's recent reveal of the Fabia Estate rally car for the Worthersee tuning festival in Austria, Audi has gone one further with the TT Clubsport. This butch-looking TT coupe concept previews a road-going model and pumps out 592bhp from a twin-turbocharged 2.5-litre engine.

Although this is merely a design and engineering study for now, there's no doubt it provides a glimpse into the future of hotter TTs, as well as the rest of Audi's range. This is because, like the forthcoming Audi SQ7 spied previously, this uses new electric turbocharging tech. 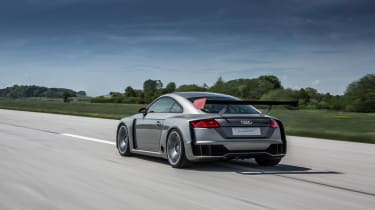 It's certainly got the looks, with an eye-catching rear wing that looks to be straight from one of Audi's GT3 cars. Blistered wheelarches allow various body slits to act as air intakes, the side ones cooling enormous brakes. The chiselled front end gets a gaping front grille, square intakes and a long front splitter.

And the under-the-skin stuff lives up to the aggressive looks. Using the same 2.5-litre five-cylinder engine as the new Audi RS3, the TT Clubsport take it to another level with some advanced electric turbo tech. A 48-volt electrical system supplies energy to spin the twin turbos before the exhaust gases reach it. Click on the Youtube link above to hear the astonishing sound all that makes.

A lithium-ion battery in the boot stores up energy from brake recuperation, which is then used to power a compressor that fills in the torque gaps lower down. It should mean Tesla-like instant punch from the off, and the 650Nm of torque means impressive claims of 0-62mph in 3.6 seconds. 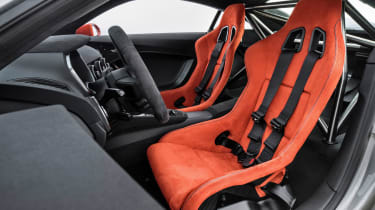 It also provides a snapshot of what a future Audi TT RS could look like and what tech could feature. We've also seen the Clubsport name used previously in roofless concepts, but nothing with this level of performance.

The 2015 Worthersee meeting is on the 13th of May 2015, and we'll see this, The Fabia estate rally car and possibly more unveiled there in the flesh.

Click here to read our full review of the Audi TT...