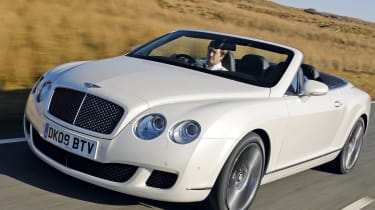 THE standard GTC is already a magnificent luxury convertible – but the Speed takes things to new heights. And the best thing is the upgrades don’t diminish the regular model’s significant talents. The GTC Speed is one of the most desirable open-top cars in the world, and the blend of quality, power and style is sure to make it a hit with the lucky few able to afford it.

It's full Speed ahead for Bentley’s drop-top! After the success of the flagship GT coupé and Flying Spur saloon models, the GTC convertible is now available in Speed trim.

Featuring the same array of upgrades, the 200mph cabrio costs £17,500 more than the ‘basic’ variant, taking its price to an eye-watering £153,400. So, is it worth the extra? Externally, it’s distinguished by a dark-tinted grille, 20-inch wheels and subtle rear spoiler. But what sets the Speed apart are its performance upgrades.

Power is up by nine per cent to 601bhp and torque by 15 per cent to 750Nm. Plus, reworked internals have removed inertia from the twin-turbo W12 – and as a result, it’s smoother and more powerful than ever. Despite weighing 2,485kg, the GTC is amazingly fast – the vast torque output means there is effortless thrust at any engine speed. The retuned exhaust gives a lovely baritone roar, too.

And the GTC Speed’s chassis certainly copes with the extra power. The ride height has been lowered by 10mm, the steering retuned and the front sub-frame tightened. The four-wheel-drive system serves up strong grip and traction, while the delicacy and accuracy of the steering – combined with the excellent body control – make this a much more agile car than its vast dimensions suggest.

Not only that, but the chassis feels rigid with the top down. Plus, the fully automated fabric roof is superbly upholstered – when it’s in place, it shuts out noise so well, the cabin is as serene as the coupé’s. Adaptive dampers add a comfortable ride to the refined package.

Premium options include ceramic brakes, plus a Naim audio system. The boot is large and the rear seats big enough to carry adults, so the GTC is a proper four-person cabriolet – although you pay the price with economy of well under 20mpg.

Not that this will bother buyers: Bentley predicts 50 per cent of GTC sales to be Speed models – and we have no reason to doubt this claim.

Rival: Aston DBS Volante Packing a 510bhp V12 and bespoke bodywork, this promises an intoxicating experience. The limited-edition supercar is set to go on sale this summer.