World's fastest ever four-seat drop-top is a genuine thriller 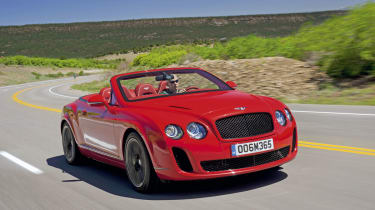 There’s no doubt this is a scintillating, firebreathing open-top car that easily lives up to Bentley’s claim of having created an ‘extreme’ performer. In this case, however, it’s also a car that you can share with friends, hence the company’s desire to stress the Continental GT’s four-seat capability. In practice, few Supersports owners will be able to get near the limit to fully appreciate the finely tuned handling. But they really should try, because this is a thoroughly entertaining Bentley that deserves to be let off the leash now and again.

THINK open-top Bentley and the mighty 4.5-litre Blower model of the Twenties might spring to mind. Packing enormous attitude with a vast supercharger poking out of the front, it’s one of the company’s all-time great cars.

Fast forward to 2010, and there’s a pretender to that crown – the Supersports Convertible. Claimed to be the world’s fastest-ever four-seat drop-top, it’s also the quickest open-air car in the firm’s history, thanks to its twin-turbocharged 6.0-litre W12 which it shares with its hard-top sibling.

It produces 621bhp and 800Nm of torque but crucially, in these environmentally conscious days, the Supersports runs on petrol or E85 bioethanol. It still returns a 0-60mph dash of 3.9 seconds, and is in that rarefied club of cars topping 200mph, no matter which fuel you put in the tank. While both the Coupé and Convertible are positioned as the marque’s ‘extreme’ performers, Bentley is now keen to stress the more sociable nature of its drop-top which – unlike the two-seater Coupé – has seating for four and a triple-quilted electricallyoperated hood for refinement. There’s no denying the Supersports Convertible has the wow factor in spades.

With 20-inch Smoked Steel wheels shod in Pirelli Ultra-High Performance tyres, flared wings to accommodate the two-inch wider rear track, a bluff nose and low-slung aggressive lines, there is a real hint of menace, too.

In place of the usual plump Bentley armchairs are race-style, carbon fibre seats that look positively skeletal, but are actually supportive and comfortable and help the car lose 45kg, while the wheels are 10kg lighter. Massive carbon-ceramic brakes strip away another 20kg, reducing weight overall by 98kg compared to the GTC Speed Convertible.

On the move, the effects of this diet are obvious, making the 2,395kg Bentley more nimble and responsive than its GTC Speed counterpart. The steering is more taut and direct, even if more feedback wouldn’t hurt.

The ride is well judged (the adaptive damping system has been re-tuned) and even in the wet, the four-wheel drive feeds 60 per cent of the powerto the rear. This helps the ESP system hold the car tightly on line in exhilarating, rear-wheel-drive sporting fashion.

Acceleration is instantaneous and gutsy, with amazing pace off the line. The mid-range urge is particularly impressive – as is the bellowing, bassy soundtrack from the giant twin exhausts. The ZF gearbox has been extensively redesigned and it shows, now changing 50 per cent quicker. It double shifts – for instance from sixth to fourth – making fast overtaking on B-roads addictive, especially with the roof down.

The Convertible is easy to drive, though. The brakes offer more feedback than you might expect from ceramics and, thanks to that ESP system, this super-quick Bentley is always sure-footed and fun. Extreme fun.

Rival: Aston DBS Volante One of the most desirable open-top cars in the world, the 510bhp 6.0-litre V12-engined Aston costs £1,200 more than the Bentley, but at this end of the market, who’s counting the odd hundred here or there?