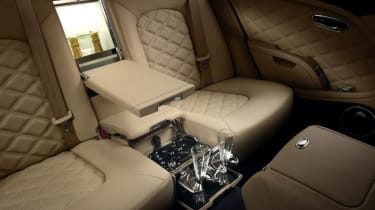 Bentley is working on alternate materials that will allow the British brand to sell to well-heeled vegan customers, the head of design has revealed.

The Crewe manufacturer is known for its luxurious interiors, which can feature up to 20 animal hides in their leather upholstery and trimming. Speaking at the Financial Times Future of the Car Summit, Bentley’s Director of Design Stefan Sielaff revealed that customer demand has persuaded the design team to investigate alternatives to the traditional materials.

“You can’t sell an animal-containing product like a Bentley, with 20 leather hides, to someone with a vegan lifestyle,” Sielaff said. “We’ve been talking to these customers, in California especially, and they’re asking us what can we give them. We do a lot of custom-made and coach-built solutions, in conjunction with our colleagues at Mulliner, and therefore we want to satisfy these customers because they are the peak of a trend.

“We will shortly present a Bentley with a vegan interior; it’ll give you a luxury sensation but with a different way - protein leather, mushroom leather, jellyfish material.”

A Bentley spokesman declined to give an estimated arrival date for the new interior materials but admitted, “This is something the design and colour and trim guys are interrogating.”

Sielaff said his team are also investigating how electric powertrains will influence the future design language of Bentley. “We are working on exploring at the moment what will be the Bentley design language of the future, “ he said, “when we do this big step. It’s a nice philosophical discussion because we have certain elements in Bentley proportion - short front overhang, long rear overhang - and we are asking how much we can change these proportions, and whether it still be recognisible as a Bentley?”

Are you a vegan? Are you happy to see Bentley exploring different materials? Let us know below...