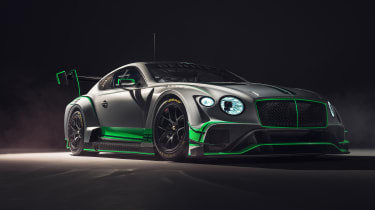 Bentley has unveiled a brand-new GT3-spec Continental GT racing car ahead of the 2018 racing season.

The latest Continental GT3 is based on the new facelifted road-going model, which goes on sale next year. It has been developed by Bentley Motorsport in Crewe, with technical assistance from the M-Sport rally team that runs the world championship-winning Ford Fiesta World Rally Car.

It is powered by 4.0-litre twin-turbo V8 but with engine management from Cosworth for additional racing grunt. Unrestricted, it produces 550bhp and the aluminium body means it has a weight of 1,300kg. 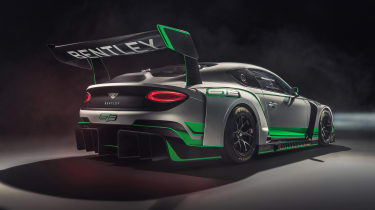 The 2018 Continental GT3 racing car has already undergone six months of testing ahead of the 2018 campaign, which includes the Blancpain GT Series Endurance Cup where Bentley Motorsport reign as the defending teams champions.

Bentley first introduced a GT3-spec Continental GT racing car in 2012 and has been a favourite among privateer teams across Europe. Teams running Continental GT3’s have scored 120 podiums and 45 race victories in 528 races.

The 2018 Blancpain GT Series Endurance Cup kicks off in Monza on 22 April with Bentley entering two brand-new Continental GT3s. Privateers will have to wait until next June to purchase one, therefore it remains a Bentley Motorsport exclusive for now.

What do you think of the new Bentley Continental GT3? Tell us in the comments area...