We get behind the wheel of the new Bentley Continental GT, and find it's like no other Bentley before it 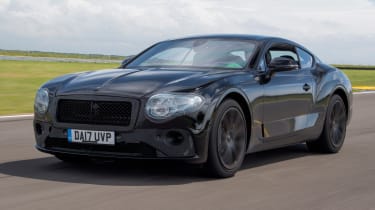 Of course, a car as complex and multifaceted as a luxury grand tourer can’t be properly assessed by a handful of laps on a racing circuit, but based on this experience the first signs are extremely promising indeed. The Bentley engineers’ first joint venture with their VW Group colleagues at Porsche appears set to deliver a Continental GT with a broader range of abilities than before.

The silhouette may look familiar, but underneath the clever cladding lies a much sleeker machine, and a very different sort of Bentley. This is the all-new Continental GT – and Auto Express has had an early taste of what to expect when the car reaches showrooms next spring.

After 14 years and sales success that surely exceeded all expectations, the Conti gets a fresh chassis and lots of new technology. It’s based on the VW Group’s new MSB platform, first used by the Porsche Panamera, but 200mm has been chopped from the wheelbase to underpin the Crewe company’s 2+2 coupé. 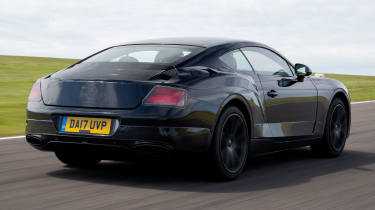 In fact, this is no mere re-skin of the Panamera; Bentley engineers were involved from the start with the MSB platform, and their demands have influenced the Porsche, just as Bentley has taken technology developed by the German manufacturer.  The new platform is a huge step forward over the dated VW Phaeton underpinnings of the outgoing car. It’s lighter, stiffer and stronger, with the front wheels pushed further forward and the engine moved rearward, delivering weight distribution which is significantly improved.

The standard air suspension now features three chambers for the rear set-up, and works in conjunction with the 48V electro-mechanical anti-roll bars (EAWS) first seen on the Bentayga, while Bentley has switched from a traditional eight-speed automatic gearbox to the latest generation of twin-clutch automatic (PDK).

Out goes the old Torsen centre differential with its fixed and front-biased torque split, and in comes Porsche’s latest PTM hang-on clutch, which in effect makes the car rear-wheel drive most of the time. It only sends drive to the front wheels when slip is detected.

The W12 engine is once again the pinnacle of the range, and is essentially the heavily revised unit that made its debut recently in the Bentayga SUV. Expect direct injection to help deliver more than 650bhp and a massive 900Nm, although a hybrid model and smaller V8 option will follow in due course. While Bentley has trimmed around 100kg from the GT’s kerbweight, it still weighs more than two tonnes. 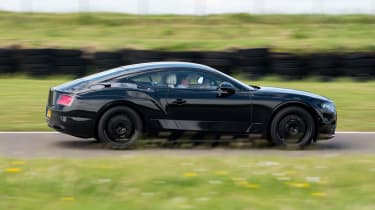 The development of the new car has taken four years and, by the end of the programme, the total fleet mileage of all the prototypes and validation models will exceed 600,000 miles. The life of a test car is hard: after two weeks in Finland cold weather testing, it is shipped via Germany (for updates) to South Africa for vigorous driving in hot temperatures and at high altitudes.

Auto Express got to drive the new car at the Anglesey circuit in Wales, having ridden in the passenger seat a few months earlier during testing in South Africa. Although a ‘PDS’ car (built from factory tooling but still a little off in terms of quality control and detail refinement), it gave us a good early impression of the new GT’s abilities.

And the news is very good indeed, because the drive is nothing like the outgoing model – in fact, nothing like any Bentley before it. While the cabin isn’t yet at the standard Bentley’s clientele will demand, it’s obvious that it will once again possess the wow factor that has defined the brand in recent years. 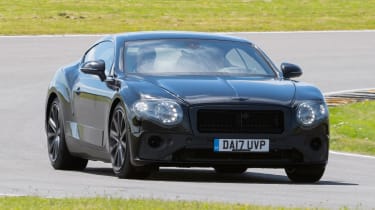 The driving position is much sportier than the old model’s, and sets the tone for a car that feels far more dynamic. ‘Luxury and Performance’ has been the guiding principle of the project, with the former rigorously maintained and the latter massively increased.

Out on the circuit the new car feels vastly superior to its predecessor, turning in crisply and able to put the power down early and effectively. The brakes refused to wilt, too, despite being worked hard.

There are ‘Comfort’, ‘Bentley’ and ‘Sport’ driving modes, but unusually in an era of multiple parameters, steering effort remains the same regardless of what’s been selected, to give the car a definable character. It’s fairly light, but surprisingly precise for a Bentley.