A round of changes for the Bentley Continental GT range is good news for buyers, but updates are hardly sensational

It looks sharper, it drives more keenly, it has more power and torque and is less naughty on the environment than ever before thanks to a new cylinder de-activation system. No wonder Bentley is quietly chuffed with what it has done to its now 12-year-old Continental GT, sampled here in both GT Speed and V8S guises.

As Bentley’s best selling car, the Continental GT has undergone another round of evolutionary upgrades for the 2016 model year, with tweaks to the styling of both the interior and exterior of all versions. Inside there’s some new quilting detail for the seats, a slightly redesigned clock and the introduction of various new trim levels.

Outside, the rear lights get subtle new chrome surrounds, the distinctive mesh radiator grille at the front has been redesigned to look more sporting, as has the front bumper, and at the rear there’s a new diffuser for the Speed model, plus a small new boot spoiler.

For the V8 twin-turbo models the engine and gearbox remain as before, with 521bhp and 680Nm for the S model (500bhp and 660Nm for the regular V8) allied to an eight-speed automatic gearbox. Performance stays the same at 0-62mph in 4.3sec for the S with a 192mph top speed. The chassis, steering and suspension also remain unchanged with spring rates on the sportier S version being some 25 per cent stiffer than standard front and rear. 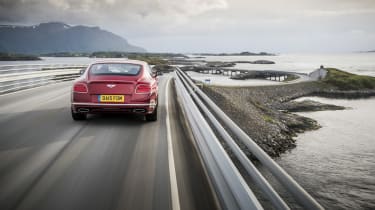 For the 12-cylinder GT Speed, however, numerous engine upgrades have occurred, mostly to the software but also to the hardware to increase power to a rousing 626bhp with torque swelling to 820Nm. That’s enough to fire the 2,395kg GT Speed to 62mph in just 4.1sec – two tenths faster than the 30kg lighter V8S – and on to a top speed of 203mph.

Emissions on both the 12-cylinder models – regular GT and Speed – have also been improved thanks to the venerable engine’s new cylinder deactivation system. Officially Bentley claims a 4-5 per cent improvement to the combined cycle figures. Unofficially, the fact that the W12 becomes a V6 whenever conditions allow – at a steady state beyond 3000rpm and ideally on a flat piece of road such as on a gentle motorway cruise – has increased the car’s economy by as much as 20 per cent in the real world, according to Bentley. 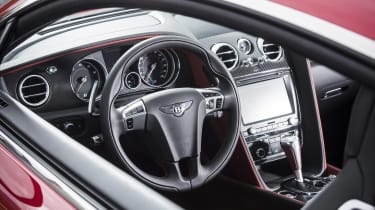 On the move, all of the new models still feel like big, heavy machines, the GT Speed especially so. Despite the evolutionary improvements this is still a car for the more laid-back driver rather than fast charger. The performance is suitably majestic in all models, even the basic V8 feeling like it has a surfeit of energy to unleash at all times. But this is still no sports car, even with the electronic dampers set to their most aggressive modes.

The V8s do a better job of disguising their weight on the road, the more stiffly sprung S version getting closest to being a true driver’s car thanks to its superior agility and, to these ears, a more compelling V8 soundtrack complete with crackles and bangs on overrun. Though torquier, the Speed emits a slightly anodyne sound by comparison, even though it’s marginally the quicker of the two on paper.

In all, this is a worthy and entirely logical round of updates for the Continental GT. The advances in economy and emissions aren’t likely to win the car any ecology awards any time soon, but the extra style, pace and grace it now contains will endear the GT to new and current owners alike. If you liked the previous versions, there is no reason not to like these ones a little bit more.