A low budget doesn’t have to mean a low-quality. We’ve picked out ten terrific cars for under £1k 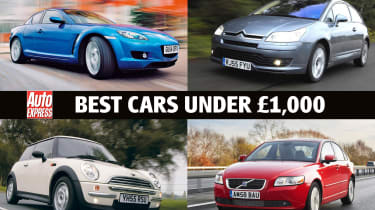 On the lookout for a car, on a small budget? Manufacturers around the world may make billions by selling new cars that have unprecedented levels of performance and cutting-edge tech, but not all of us can afford the prices that come with them. That’s why we’ve rounded up some of the best bargains out there and come up with a list of the best cars for under £1,000.

We’ve compiled an shortlist of cars costing £1k or less, and it covers everything from hatchbacks to crossovers and even luxury cars. In fact, we’ve gone a step further and even listed some of the best performance models available at basement prices.

There are pitfalls of course. Rust, mileage and maintenance are all things to be wary of, but with a thorough inspection and a bit of patience there’s no reason you won’t come across a genuine, cheap-as-chips star.

Whether you’re after a fun car to drive or simple practicality, this list has it all. And at less than £1,000, every single one is very much a half-price hero.

Scroll down to read about our the cars that can be bought for less than £1,000 - or check out these other price brackets... 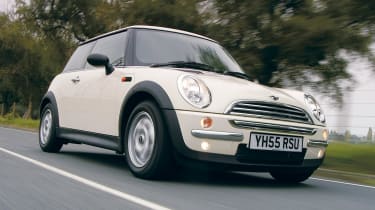 For many people, the MINI is the ultimate small car. It combines some of the most important factors that buyers consider in a supermini: style, fun handling, comfort and easy parking in tight city spaces. Our budget here means you can stretch to a first-generation MINI One, which was the entry-level model in 2005. However, for less than £1,000, beggars can’t be choosers, and the core appeal of the MINI is still very much present in this car.

It might be short on kit next to higher-spec versions, but you won’t mind when you get behind the wheel and enjoy the MINI’s responsive steering and chassis, manual gearbox and funky interior design. This isn’t the fastest choice here, but there’s plenty of fun to be had – and at a bargain price.

It may even start to rise in value, because the earliest models are now becoming sought after by enthusiasts. Mind you, if investment is your goal it may be better to spend more on a Cooper or even a Cooper S. 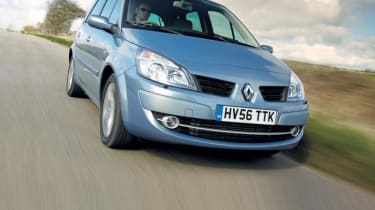 Need a lot of space for not a lot of money? A French MPV ought to be on your list. We’ve picked out a Renault Grand Scenic, because there are plenty around. Supply outstrips demand so prices are low, and while the 1.6-litre petrol car won’t be much fun, it’ll be an honest family workhorse.

The Grand Scenic has three individual folding middle-row seats, plus two rearmost seats that can be removed to open up loads of capacity for carrying luggage or people. 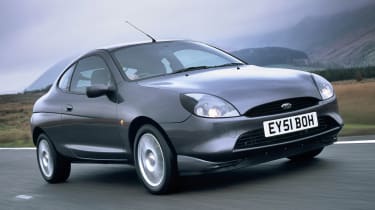 The early 2000s were a golden era for small, affordable fun cars, and Ford’s Puma is one of the finest examples.

It was based on Fiesta architecture, but Ford worked hard to differentiate the Puma from its humble roots, with changes to the suspension, engine and gearbox to make it even more engaging and entertaining to drive.

This worked brilliantly; the Puma is a true driver’s car, especially with the revvy 1.7-litre petrol engine. We found one for less than the cost of a modern smartphone. Just watch out for rusty rear arches in low-priced models. 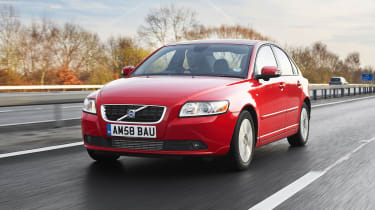 A more traditional family car like a VW Passat can be yours for £1,000, but we reckon a Volvo S40 will be more interesting to own, plus more reliable.

Mid-2000s Volvos shared parts with Fords, so spares should be plentiful, but the Swedish firm’s reliability is legendary anyway. So is its safety; the S40 scored a five-star Euro NCAP rating in 2004.

It’s comfortable and spacious inside, although it’s smaller than you might expect from a saloon because it rivalled larger family hatches when new. 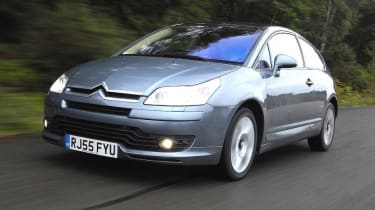 The Citroen C4 is a bit of a left-field choice, but probably one you wouldn’t think of at first. In its day it wasn’t a stand-out car, because it was outclassed by hatchbacks on handling, performance and practicality. But for just £850, the C4 starts to look a lot more interesting.

While it’s not a common sight on the road, it certainly scores on style with its large glass area and unique design. As with the Ford Puma, those looks are ageing well, and the Citroen is comfy, if a little dull to drive.

VTS versions are faster, but a little pricier. A five-star Euro NCAP rating back in the day is worth a mention, too. 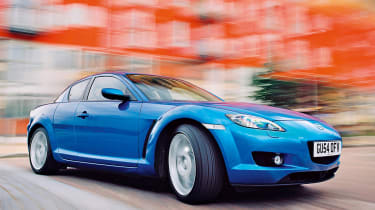 Want a sports car that stands out? The Mazda RX-8 could be for you. The rear-wheel-drive coupé has space for four, with rear-hinged half-doors to aid access, and nimble handling makes driving a joy.

But while the rev-happy rotary engine delivers a relatively modest 189bhp (there was also a 228bhp version), it’s heavy on fuel and oil. The latter needs topping up as frequently as every 1,000 miles; not doing so can potentially lead to engine failure. So be sure any potential purchase has been well cared for. 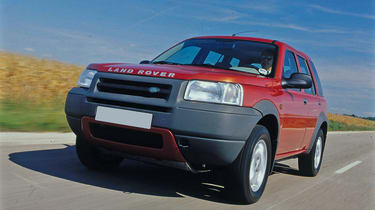 The Land Rover Freelander offers genuine off-road ability without compromising road manners too much, and at less than £1,000, it could make a great buy if you’re looking to do some green-laning or tow a trailer.

We’ve gone for the 2.5 V6 model. Many diesels are showing their age these days with rattly, tired-sounding motors, and the 1.8-litre K-Series four-cylinder is known for being unreliable. Also, a smooth V6 really appeals at this price, and the extra torque should prove useful for towing or off-roading. Just bear in mind that what you save up front will help with the higher running costs.