Mulgari ICON03 launched: a tuned version of the M240i

British tuning company Mulgari pays homage to BMW’s back catalogue of ‘M’ models, with a specially modified version of the M240i coupe 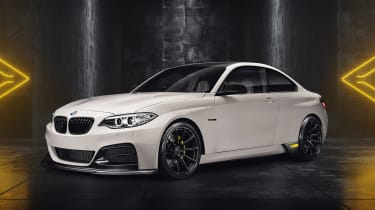 The Berkshire-based tuning company, Mulgari, has launched a modified version of the BMW M240i, designed to honour the German brand’s past performance models. Revisions include heavily modified bodywork, updated suspension, a tweaked interior and a tuned version of BMW’s 3.0-litre engine. Production is limited to just 25 units.

Mulgari started by fitting the standard M240i with a wider set of alloy wheels and massively flared, squared-off wheel arches, which it claims pays homage to the E30 M3. A more aggressive body kit with a functional front splitter completes the look, while the ICON03’s dimpled carbon fibre roof apes the unit fitted to the E46 M3 CSL. 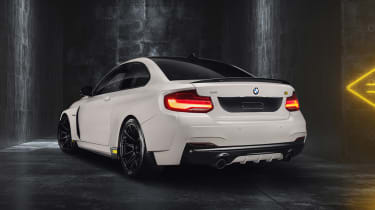 The ICON03 is powered by a tuned version of the M240i’s turbocharged straight-six, producing 590Nm of torque. Mulgari claims that outright performance is not focal for the ICON03, so power figures remain unknown.

A spokesman for the brand said: “We believe that under 500bhp is where a true drivers car lies; plenty of power but more importantly power that can be used.”

The Mulgari ICON03 also features a suite of suspension upgrades from the Rochester tuning company KW Automotive, a full stainless steel exhaust system from Akrapovic and wider, grippier tyres from Michelin. The Barnsley-based tuning firm, Peron Automotive, has also been named as a partner for the project.