Images show how new lighter, more powerful and faster BMW M3 could look ahead of its summer 2014 release date 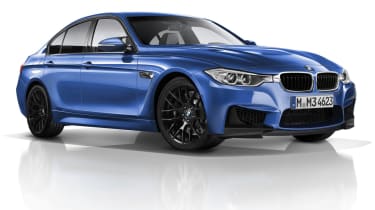 The new BMW M3 will be lighter, more powerful and faster than the model it replaces. A company insider told us how the four-door saloon (the coupe will be called the M4) “will take the brand’s most popular and famous performance model to new heights with the latest body and engine technologies”.

Our exclusive images show how BMW will transform the 3 Series saloon into a street racer, with a lower ride height, blade front bumper and other cues such as M3-badged vents on its flanks and intricate mirrors.

Under its bulging bonnet, the M3 will use a new six-cylinder 3.0-litre twin-turbo engine. Unlike the M5’s reworked version of BMW’s 4.4-litre twin-turbo V8, the new engine will be used exclusively in M models, not appearing in any lesser cars.

Performance figures are expected to be around 450bhp – an increase of 30bhp over the 4.0-litre V8 in the current car. There will be an even bigger increase in the torque figure – potentially as much as 150Nm – taking the total to 550Nm at just 2,000rpm.

Despite offering more standard equipment than its predecessor, and superior comfort, the new car will weigh about 100kg less than before. BMW will achieve this by using a raft of lightweight body materials in construction. Just like the current M3 Coupe, the new saloon will get a carbon-fibre roof, but the lightweight material will also be used for the bonnet and bootlid. Meanwhile, the front wings will be made from composite plastics.

All of this should result in scintillating performance. Our insider said BMW is expected to quote a 0-62mph time of 4.3 seconds – three tenths quicker than the current M3. He also warned that official figures are usually conservative and it could be even quicker in the real world.

And while top speed will be limited to 155mph, the new M3 should be able to hit 180mph when electronically derestricted.

Of course, M cars aren’t just about straight-line performance – the new M3 must be as engaging to drive as its predecessors. Less weight will improve agility, while the latest M Division limited-slip differential will boost traction when exiting corners. The car will also feature hydraulic steering, rather than the electrical set-up of the normal 3 Series, and will run on normal tyres, not run-flat rubber, to further improve feel.

The driver can still alter the weight of the speed-sensitive steering, as well as the stiffness of the adaptive dampers, the severity of the throttle response and the shift speed of the seven-speed dual-clutch transmission.

Enthusiasts will be pleased to hear a manual version will still be offered, and that BMW is also working on tuning the acousticsof the turbocharged engine to ensure it’s suitably charismatic.

The new M3 is expected to appear later this year at the same time as the M4 Coupe – possibly at the LA Motor Show in November. 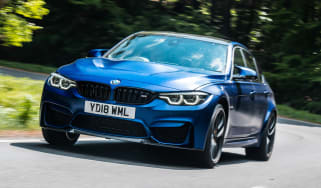