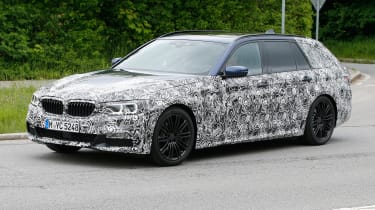 BMW is hard at work developing the next-generation 5 Series and now the more practical Touring variant has been spotted on the road for the first time, along with the GT and M5 variants. The range is expected to arrive through 2017 after the saloon, which was also recently spotted, has been launched this year.

Although the body is heavily disguised, you can make out the overall shape of each variant of the Audi A6 rival. The design detailing and profile are familiar BMW, indicating an evolutionary step on from the current car's design rather than a radical rethink. The conservative route would be similar to that followed by the new 7 Series - but the squatter appearance and sloping rear window line do hint at a slightly sportier look for the new model.

The next-generation M5 has also been spotted again, and we expect it to get over 600bhp, from a tweaked version of the current 4.4-litre twin-turbocharged V8 engine, with improvements to emissions and fuel economy as well as power output. 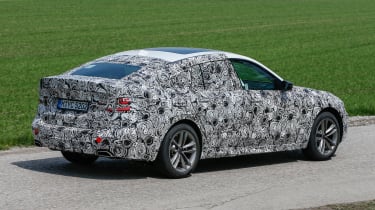 Despite the sleeker back-end, we're expecting a marginal increase in space for the Touring estate and GT hatchback models, which offer buyers an extra dose of practicality. The seventh-generation model is likely to shed around 100kg thanks to the use of light carbon-fibre reinforced plastics (CFRP) in the bodywork and chassis. These materials were first used by BMW on the new 7 Series.

The cabin will also move further upmarket, with BMW sources previously telling Auto Express the next-gen 5 Series will feature sector first autonomous tech, with the use of gesture control to activate interior features also possible. In terms of engines, nothing has been officially confirmed but rumours suggest BMW could add three-cylinder petrol and diesels for the first time, alongside four and six-pot units as well as a plug-in hybrid model.

What do you think BMW should be trying to acheive with the design of its new 5-Series? Let us know in the comments section below...