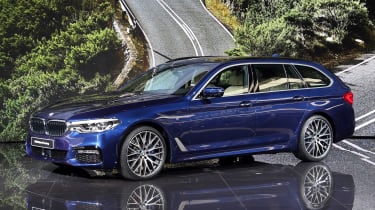 BMW’s relentless range expansion continues with the introduction of the new 2017 5 Series Touring. The Mercedes E-Class Estate and Volvo V90 rival makes its debut at the Geneva Motor Show and order books are open now, with prices starting from £38,385 – that’s £2,360 more than the 5 Series saloon on which it’s based.

As with the four-door, the latest Touring continues BMW’s subtle and evolutionary design approach. From the B-pillar forwards, the front is identical to the saloon’s, while the rear end features enlarged LED tail-lights and a more rakish roofline than before. 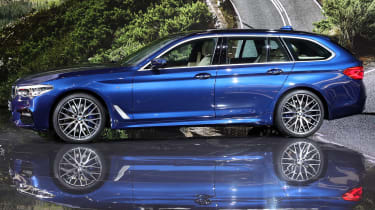 At 4,940mm long, the Touring is 36mm longer than the outgoing model, but the same length as the new saloon. It’s 8mm wider and 10mm taller than the previous car, while the wheelbase has increased by 7mm. Boot capacity is up to 570 litres, which is 10 litres more than before and 40 litres larger than the saloon. The E-Class trumps it, though, with its 640-litre capacity.

BMW says the boot expands to 1,700 litres with the rear seats down – that’s 30 litres more than the old car. Those seats, which fold in a 40:20:40 split, can be released remotely from the boot and have electrically folding backrests. All models get an electric tailgate, while the unique opening rear window is retained from the previous model. 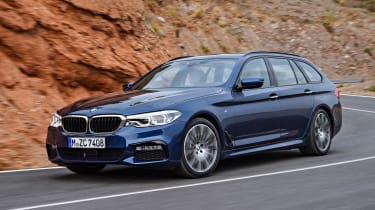 From launch, engine options will comprise of four and six-cylinder twin-scroll turbo petrols and diesels. The entry-level 520d Touring produces 187bhp from its 2.0-litre diesel, with BMW claiming 65.6mpg economy and CO2 emissions of 114g/km. Step up to the 530d and you get a 261bhp 3.0-litre straight-six diesel promising 56.4mpg. This car is also available with xDrive all-wheel drive.

At launch, the smallest petrol engine is the 248bhp 2.0-litre four-cylinder turbo found in the 530i, while the 335bhp 3.0-litre straight-six 540i Touring tops the range for now.

Do you like the look of the new BMW 5 Series Touring? Let us know below...