The updated BMW 7 Series flagship gets a bold new look with a huge grille, plus new hybrid and engine options

The new facelifted BMW 7 Series has made its public debut at the 2019 Geneva Motor Show. The German brand's flagship limo has been given a substantial redesign, with new engines, a new plug-in hybrid option and updated tech forming part of an extensive update.

The new face is clearly inspired by the X7 SUV, and aims to link the two 7-badged luxury models and distance the 7 Series from the 5 Series. With China and US sales the limo’s bread and butter, the revamp has been created with these countries in mind.

Clearly, the new chrome kidney grille is much larger, and raises the bonnet edge 50mm higher than before. The redesigned headlights are far slimmer than on the pre-facelift model and amplify the size of the grille. Adaptive LED units are standard, with BMW’s Laserlight set-up remaining an option. 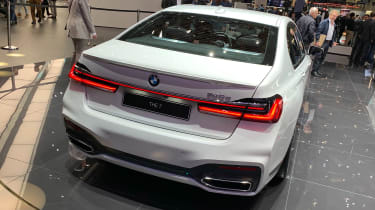 The front bumper has a more streamlined shape. New air curtain panels on each edge of the front apron cut turbulence around the front wheelarches, while new chrome detailing has also been applied.

The side vents exiting behind the front wheelarches have been revised, and there’s a new rear apron and revised tail-lights, now linked by a full-width LED strip across the bootlid.

Inside, the layout does not change, but the materials used and offered do, along with some of the tech. A 10.25-inch central screen running BMW iDrive 7.0 is now supported by a fully-digital 12.3-inch instrument panel. New wood trim options also appear. Cars with the M Sport package and the V12 M760Li xDrive model get sportier touches inside, too. 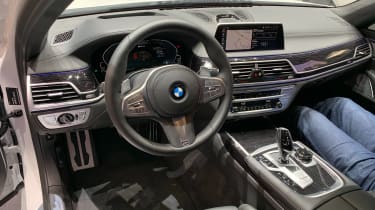 That car still spearheads the engine line-up, with its 6.6-litre V12 capable of 0-62mph in 3.8 seconds. BMW says the 4.4-litre turbo V8 in the 750i-badged cars has been thoroughly reworked, with power shooting up by 79bhp, to 523bhp overall.

The plug-in 7 Series is now badged 745e and has ditched the four-cylinder petrol unit for a turbocharged in-line six-cylinder petrol engine. It’s teamed with a higher-voltage battery and electric motor to create a more powerful hybrid system with up to 389bhp. BMW claims 34 miles of electric running for the regular-wheelbase version.

All models have an updated eight-speed BMW Steptronic auto box. The spread of driver help features grows with a new reversing assistant. Intended for use in tricky reversing situations, it tracks the exact same line the car took over the previous 50 metres, with the driver only controlling the brake pedal. Remote control parking also arrives, but won’t be equipped on cars until July. Order books open in the spring.

Click here for a battle of the luxury limos between the BMW 7 Series and Mercedes S-Class...

Welcome to our Geneva Motor Show hub page, scroll down for all our Geneva content...
BMW 7 Series vs Range Rover 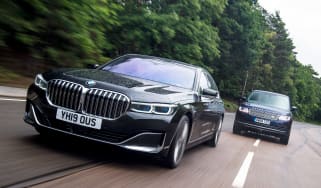 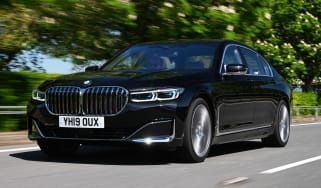 BMW’s latest luxury limo gets a bold look, better plug-in hybrid tech and is closer to the Mercedes S-Class than ever