New limousine has been toned down – but still scores with luxury and technology. 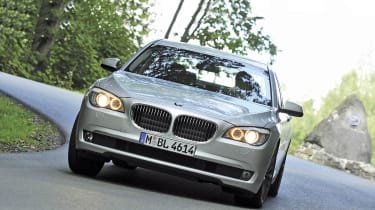 The 7-Series does everything a luxury limo should – and it works well as a sports saloon, too! It’s nimble, sharp and feels far lighter than it really is. The 750i, with its 4.4-litre twin-turbo V8, is great, but this 730d is the more complete car, thanks to effortless pace, utter refinement, strong economy and relatively low emissions.

We’ve already driven BMW’s new 7-Series in pre-production form, but the car you see here is the finished article!

Free from its disguise, it’s certainly more handsome. The looks are described by design chief Chris Bangle as “more classically proportioned”, and it hides its vast bulk well with sharp, simple creases.

Inside, the cabin gets a sportier focus, with all of the controls and displays angled slightly towards the driver.

The centre console houses the gearlever and a new iDrive controller, which is more intuitive than before, thanks to shortcut buttons placed around the main dial.

You can specify clever technology, too, including blind spot and lane departure warnings, a head-up display with a speed limit detector, and side view cameras to prevent accidents at junctions.

As you’d expect, quality, finish and cabin ergonomics are all first class. On the road, the standard-fit Drive Dynamic Control system alters the car’s behaviour by allowing the driver to choose from four modes: Comfort, Normal, Sport and Sport Plus. This adjusts the suspension, steering, throttle, gearing and traction control to varying degrees.

In Comfort mode, the 7-Series absorbs bumps with ease. But select Sport, and it feels like the smaller 3-Series. Optional four-wheel steering makes a major difference to the car’s turning circle and responses, too.

The newcomer also benefits from BMW’s EfficientDynamics programme for the first time, which means the 730d is cleaner and more economical than its predecessor, despite the fact it’s more powerful.

Rival: Mercedes S-Class Widely regarded as the luxury saloon king, with great quality, refinement and road presence. The BMW has a fight to wrestle the Merc’s crown, but we wouldn’t bet against it.