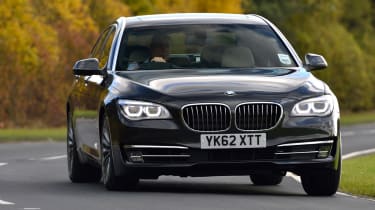 It’s clearly been a struggle for engineers who’ve been told to add BMW’s traditional driver appeal to what should be a comfortable, luxurious limo. As a result, the 7 Series is outclassed in virtually every way by an S-Class, while this ActiveHybrid 7 makes very little sense in the UK. A 740d is both better to drive and more efficient.

The BMW 7 Series has never been as popular as the Mercedes S-Class or Audi A8, but a recently launched facelifted version claims to be much improved. And now, this petrol-electric ActiveHybrid 7 offers something a little different.

BMW is anticipating the near-£70,000 hybrid will make up only a fraction of UK sales, and is targeting buyers who are more interested in the technology than economy figures.

That’s a good job, because if genuine greenness and low tax bills are your motivation, the 730d or 740d promise much more than the hybrid’s official 41.5mpg figure. The two diesels emit less than the ActiveHybrid’s 158g/km of CO2 as well.

That all puts the new model in a rather awkward position in the UK, where diesel is king – although it does make a more convincing case for itself in petrol-dominated markets such as the US.

Most UK buyers will just opt for the 740d, which is two-tenths quicker from 0-62mph than the ActiveHybrid 7, with a time of 5.5 seconds. And if they stick with diesel, they won’t lose 140 litres of boot space to the ActiveHybrid’s battery pack.

Once behind the wheel, you’ll find yourself trying to drive this car without letting the petrol engine kick in. It’ll do so in town for a few miles, although with no selectable electric-only mode, and a 3.0-litre petrol engine that’s eager to get involved, the hybrid technology is more backing track than headline act.

As it is, the car feels like a regular 7 Series; the integration of the electric motor to the drivetrain is impressive, if a little pointless.

Driving it isn’t particularly rewarding, either, with weighty steering that’s a bit short on feel and suspension that never seems properly settled.

It’s all impeccably finished inside and there’s loads of space – particularly in this stretched L model. But you can say the same for this car’s diesel relations, which are far better options.