The BMW M850i xDrive Gran Coupe is aiming to deliver the same mix of thrills and comfort as the Porsche Panamera, but can it? 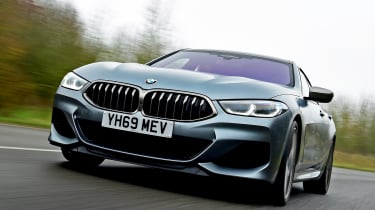 The M850i Gran Coupe has a broad remit, tasked with being part sports car and part luxury GT. It feels equally comfortable in both suits but you have to pay for it. Quite literally. At over £100,000 with options it looks an incredibly expensive car, when the equally impressive, if not quite as rapid, 840i does a remarkably similar job for almost £30,000 less.

This is the BMW M850i xDrive Gran Coupe, the German firm’s answer to hot versions of the Porsche Panamera and one of few standard BMW’s to nudge the £100,000 barrier.

It’s a car tasked with doing a multitude of things: firstly, being based on the 8 Series coupe, it's a GT at heart not a full-on sports car, but that the application of BMW's M Performance tag for this M850i means it needs to marry that comfort and cruising ability with performance and handling, so it has to be fundamentally good to drive. On top of that, those extra doors and rear seats also mean it now has to pull off 7 Series levels of luxury and comfort. Quite a list, then.

There’s certainly no doubting its performance credentials. Nestled beneath the bonnet is a 522bhp 4.4-litre V8 that develops 750Nm of torque. Paired up to an eight-speed automatic gearbox and four-wheel drive means 0-62mph in taken care of in 3.9 seconds. Staggeringly quick for a car weighing 2,070kg. 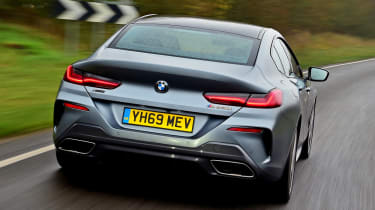 That speed is also matched to an impressive level of agility and composure on the move for such a big car. The Gran Coupe carries an extra 231mm of bodywork over the regular coupe - 201mm of that is between the wheels - but you’d never know as it feels just as balanced as precise. The steering is really sharp, and in combination with the rear-wheel steering, helps to enhance its responses making it feel like a much smaller, nimbler car.

Hit Sport mode and everything tightens up; the steering becomes heavier, the ride becomes noticeably firmer and the noise from the exhaust amplified through the speakers in the cabin. The engine has bundles of power throughout the rev band so relentless and rapid progress is never in short supply. It does an uncanny impression of a sportscar, even at over five metres long.

As capable as it is, the M850i Gran Coupe is best left to its own devices, in Adaptive mode, where it's able to tailor the engine, suspension and gearbox parameters to suit the road at that exact moment. The body control feels relaxed and fluid, allowing the car to move with the road, but it’s often in contrast to the damping of wheel movements - the big 21-inch alloys thud over potholes and joints in the tarmac, just piercing that air of refinement and composure occasionally.

Still, the Gran Coupe does its best to transform into a long-legged and relaxing GT car, and mostly succeeds. Although, therein lies the problem: the entry-level 840i does an equally impressive job in this respect for almost £30,000 less.

Performance is certainly accounted for, but what about luxury? As you’d expect the M850i is a tech-fest inside and beautifully finished. There’s all the kit you’d ever need onboard such as four-zone climate control, Apple CarPlay, adaptive cruise control, a full suite of parking sensors and cameras, heated and ventilated seats plus gesture control technology to control the infotainment system on the move.

It’s as luxurious as a 7 Series upfront but passengers in the back may have some gripes. Although the Gran Coupe is as long as BMW’s flagship saloon, that swooping roofline comes at the expense of headroom in the back. Knee room for large adults is acceptable but you can only seat two in the rear as the centre console runs the entire length of the car. In truth a 5 Series is more accommodating and comfortable in the back. 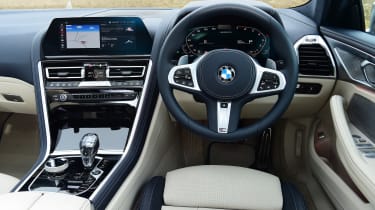 The rear bench is flexible, however, and splits into a 40/20/20 configuration so you can make the most of the boot space if required. There’s 440 litres of space seats up but the boot lid opens like a saloon car rather than hatchback, as you get on a Porsche Panamera, so it may be a little awkward loading bulkier items.

But having such a broad range of abilities there was always going to be compromises somewhere. But against a Panamera 4S, which is around £6,000 cheaper, more practical and perhaps a little sharper to drive, those compromises will stand out.