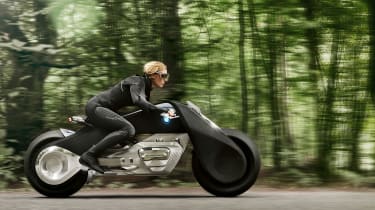 We've already seen a number of 'Vision 100' concepts from the BMW Group this year, but this is the first two-wheeled vision of the brand's future. The Motorrad Vision Next 100 is a revolutionary bike design with a variety of clever features.

Like the BMW, MINI and Rolls Royce concepts revealed this year, the BMW Motorrad bike has been built to mark the brand's centenary and to preview the next century of BMW design. It's just as radical to look at as the four-wheel concepts, with swoopy carbon-fibre bodywork wrapped in a fabric 'skin' draped across the frame. 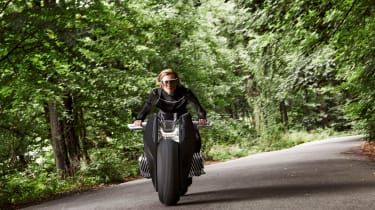 The bike uses a fully electric powertrain, and the frame and wheels are designed to be a single 'unit' so that when you turn the handlebars the whole bike frame turns with them. Despite there being nothing in the way of suspension evident (the damping is done by the tyres), a clever gyroscopic stabilisation system ensures that it will always stay upright even without a bike stand. BMW also boldly claims that the rider doesn't require a helmet as a result.

BMW is promising that enthusiasts will be fully catered for in a future world of driverless cars, as the concept "takes the analogue riding experience to a completely new level". No autonomous systems here, then, but it does use vehicle-to-infrastructure tech to predict hazards ahead and warn the rider.

Further tech comes in the form of a smart visor that can relay driving data, navigation functions and messages in a set location for the drivers eyes to briefly look away from the road. There's even a rear-view mirror function where the driver can look up and see a rear camera feed.

Tell us what you think of the BMW Motorrad Vision Next 100 in ther comments...