MINI is joining in with parent company BMW's centenary celebrations, and to mark the occasion it's unveiled the MINI Vision Next 100 concept. It aims to provide a glimpse of what the future could hold for the iconic British brand.

Unveiled at an event at the Roundhouse in North London, the MINI joins offerings from other brands - the BMW Next 100 concept, shown earlier this year, and the Rolls-Royce 103EX Vision Next 100 which debuted at the same event.

The three concepts each took different approaches. The BMW concept was designed to provide a glimpse of what 'sheer driving pleasure' might involve in the future, while Rolls-Royce (understandably) chose to exhibit its vision of ultimate luxury. MINI has gone down a different route, and the tiny concept supermini is claimed to offer a 'completely individualised, permanently available form of urban mobility'.

A new level of personalisation 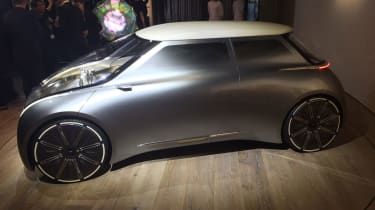 What this means in reality is a model that takes personalisation and connectivity to a new level – and one that you probably won’t even own, but rather share with others. It can drive itself to pick you up 24 hours a day and tailor its appearance to suit your mood.

The car features what is described as a “discreet silver skin”; in essence a blank canvas that can adapt to whoever is using the car. Personalised projections can change the car’s appearance, with the roof colour and interior lighting mirroring the exterior look.

While classic MINI design cues like the circular lights and floating roof design are in evidence, the concept gives a bold vision of the future with a vast windscreen that extends all the way down to the glass grille to give unparalleled forward visibility.

The bodywork is moulded around oversize wheels, curving out at each corner to envelop them in powerful-looking wheelarches. On the flanks, the doors slide forwards and back opening up the entire side of the vehicle for easier access.

Inside, the centrally mounted circular instrument that has become a familiar feature of MINIs can illuminate like a kaleidoscope and has been labelled ‘The Cooperizer’. It’s the hub of what is termed the car’s ‘digital intelligence’ and selects bespoke settings for each driver covering entertainment, communication and autonomous driving options.

There’s also an ‘Inspire Me’ button which can check your data and recommend points of interest or even switch the car into John Cooper Works performance mode. 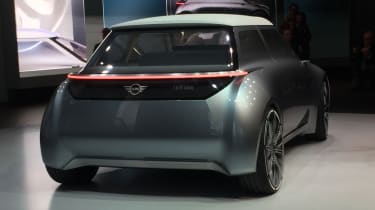 At the heart of every MINI, though, has to be the fun factor, and the Vision Next 100 is claimed to deliver the go-kart handling synonymous with the brand, with a minimalist interior allowing the driver to focus entirely on getting the most out of the car on the road.

And if you’re feeling lazy, the steering wheel can simply be moved into the space between the driver and passenger and the car will take over the driving.

As you’d expect on a futuristic concept, MINI is highlighting its eco credentials with the use of sustainable materials such as aluminium, Alcantara and recycled plastic rather than wood and leather. Plus the car is geared towards sharing, with MINI claiming its autonomous driving capability would allow it to coordinate nights out for like-minded individuals by picking them up at different points.

The concept car measures 3,628mm in length and 1,848mm in width, which is around 200mm shorter and about 100mm slimmer than the current three-door MINI hatchback, and only around 200mm longer than the baby Rocketman concept of 2011. That’s in part thanks to the zero emission drivetrain and reduced need for crumple zones, and it gives us another tantalising glimpse of what a mini MINI could look like. 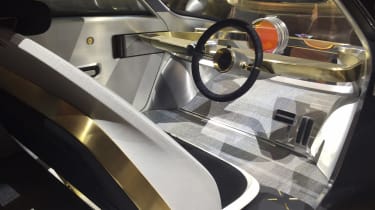 Designer Anders Warming told Auto Express: “I wanted it to be a mini MINI, but I didn’t want it to be so small and compromised that we couldn’t fit four people. As a three metre 60cm footprint, it is a very space efficient design.”

And asked what cues could be transferred to a production mini MINI, he responded: “All of them. This is to be seen as a small MINI. It is only a little bit longer than a Rocketman. We are in the same segment of small, urban mobility.”

MINI boss Peter Schwarzenbauer admitted the prospect of a small MINI still interests the brand, but offered some words of caution. “We are looking at it but we are working in parallel to have an electric MINI and this means we need a certain size of car to put enough battery in it that it is worthwhile,” he told Auto Express. “So to have a small Rocketman and then electrify it is technically extremely challenging. We don’t have a solution.”

Give us your thoughts on the MINI Vision Next 100 concept car in the comments section below...