They're having some sleepless nights at Land Rover. BMW's big X5 set new standards for on-road dynamics in the four-wheel-drive market. And now the Bavarian company is planning an attack on the Midlands manufacturer's best-selling Freelander with this smaller version - the X3. 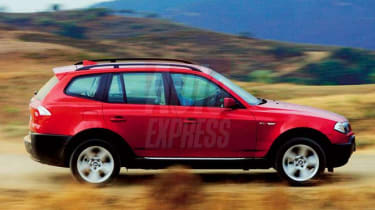 With its fine driving manners and strong performance, the X3 sets new standards for small 4x4s. Great engines, a roomy cabin and quality image mean BMW appears to have a winner. But the newcomer is pricey for the market - so Land Rover can breathe easily... until the entry-level engines arrive in 2005.

They're having some sleepless nights at Land Rover. BMW's big X5 set new standards for on-road dynamics in the four-wheel-drive market. And now the Bavarian company is planning an attack on the Midlands manufacturer's best-selling Freelander with this smaller version - the X3.

What's more, BMW is gearing up for big demand. Built in Austria by Magna-Steyr on an all-new production line, the newcomer is the only car wearing the blue-and-white roundel to be assembled by an independent company.

But with prices for the entry-level 2.5-litre model starting at £28,615, it's considerably more expensive than similarly sized rivals. So does the X3 offer enough to justify its price - and can it repeat the success of its bigger brother? As a complete package, the X3's styling is sure to divide opinion, but it does grow on you. However, the un-painted bumpers are a surprise on a car in this price range. And although BMW claims they are part of the rugged 4x4 image, they look shiny and cheap.

Some cost-cutting seems to have taken place inside, too, where the hard dash plastics and low-rent cupholders seem to be at odds with the premium pricing. However, the driving position can't be faulted, and the X3 offers impressive head and legroom all-round. With 480 litres of boot space and split-fold rear seats, it's practical enough, too.

But with only net pockets in the doors, a small centre cubby and a tiny glovebox, the X3 has none of the clever cabin storage seen in cheaper rivals such as Nissan's X-Trail. Where the X3 really excels, though, is on the road.

It is fitted with the new xDrive four-wheel-drive system from the reworked X5. This provides electronically controlled distribution of power between the front and rear wheels for outstanding levels of control. The result is saloon car-like grip, driver involvement and body control.

This makes the X3 fun to drive, as the constantly moving power split, plus accurate and well weighted steering, means the BMW offers great feel and feedback. The lack of body roll is very impressive, but even standard models have a slightly hard ride that makes the car uncomfortable over rough surfaces. Sport versions are equipped with even stiffer suspension. Still, in town, a tight turning circle and good visibility mean the car is well suited to urban life.

If you venture into the rough, the Hill Descent Control and xDrive traction mean it's capable enough. Add strong brakes and good motorway refinement, and the X3 sets new class standards of driver appeal. It's available from launch with 2.5 and 3.0-litre engines. We drove the latter, which gives the same smooth performance as it does in the 330i and 530i saloons. A six-speed manual is standard, with a five-speed automatic on the lengthy cost options list. But has BMW priced itself out of the market?