Baby off-roader gets an all-new design to help stave off fresh competition. We drove a prototype model to see how it fares. 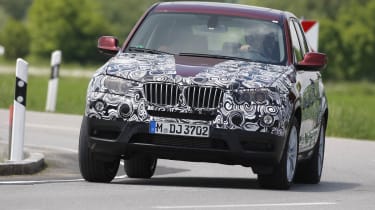 Despite only being a development vehicle, the X3 is already shaping up to be an extremely talented all-rounder. The punchy 2.0-litre engine will be the most popular and thanks to its good on-road performance and impressive green credentials, it’s easy to see why.

BMW’s X3 has never fully established itself in the way its X5 bigger brother did. Niggled by hefty price-tags and awkward styling the compact off-roader never became the baby X5 it was expected to be.

But, now BMW is preparing to release an all-new model that claims to address all the problems of previous generations and should have Audi’s fresh Q5 glancing over its shoulder.

It's due to go on sale on November 20th here in the UK, but Auto Express has been given the chance to drive a late-stage prototype to deliver its verdict.

The test mule we drove is still wearing its psychedelic disguise and you could be forgiven for thinking that hiding underneath was little more than a facelift. Look a little closer though and you'll notice a rounder and more mature design, including an X5-like front fascia and 5-Series inspired tail-lights.

Importantly, the newcomer has also grown in size too and is based on an all-new platform. Overall length has been increased by 81mm over its predecessor and it has grown widthways by 29mm.

That all adds up to an incredibly spacious cabin, that can comfortably seat five six-footers with head and leg-room to spare. Boot space now stands at 550 litres and can be boosted to 1600 litres with the rear seats down.

There’s improvements in the front of the interior too. Soft-touch materials and a stylish cabin give the newcomer a premium feel that early X3s were missing, thanks in part to the standard inclusion of leather upholstery and the iDrive system.

The model we drove was powered by a tweaked version of the 2.0-litre diesel engine mated to a six-speed manual gearbox, although an 8-speed automatic is also available.

Thanks to a range of EfficientDynamics tweaks including brake energy recuperation and stop/start the new unit is 15% more efficient than the one it replaces. Power is also up by 8% to 182bhp and torque increases from 350Nm to 380Nm.

It all shows in the driving experience too. With the manual gearbox, 0-62mph takes 8.5 seconds (8.4 in the automatic) and feels noticeably more punchy than the outgoing model. The manual gearbox is a pleasure to use and shifts are quick and precise.

When the road gets bendy, the X3 hides its size well. With the optional Dynamic Chassis Control system set to Normal, there's a small amount of body roll if you're aggressive but set the system to Sport and the suspension firms up to make the X3 surprisingly agile.

Thankfully, ride comfort hasn't been sacrificed and the compact SUV deals with potholes and road imperfections perfectly, even with the suspension on its sportiest setting.

Although the 2.0-litre diesel will be the only engine available at launch, keen drivers can look forward to the addition of a 3.0-litre diesel engine to the range in the middle of 2011 which boasts a 0-62mph time of 6.0 seconds.

The X3 won't lose its camouflage until the Paris Motor Show in September but when it does, the newcomer is likely to look far more like its X5 bigger brother, and now with its much improved driving dynamics and luxurious cabin it'll drive more like one too.