BMW M gets its hands on the latest X5, borrowing power from the brand new M8 coupe 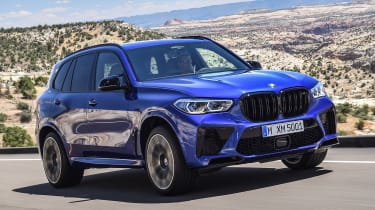 BMW's M division has revealed its latest creation in the form of the third-generation X5 M, which will make its full debut at the Los Angeles Motor Show in November and arrives alongside its X6 M coupe-inspired sibling. Prices are set to start from £110,610.

Both join the recently launched X3 M and X4 M to take the total number of M-developed super-SUVs in the BMW fold to four models. However, the larger X5 M arrives boasting V8 power, and is a fresh rival for the Mercedes-AMG GLE 63 S and the Range Rover Sport SVR at the larger end of the performance SUV class.

Under the bonnet is a twin-turbocharged 4.4-litre V8, lifted from the brand new M8 and capable of revving out to 7,200rpm. In the regular X5 M it develops 592bhp and 750Nm of torque, enabling 0-62mph in 3.9 seconds. As ever, BMW has also developed a more potent Competition badged model. Using the same 4.4-litre engine power this version steps power up to 616bhp, cutting the dash to 62mph from standstill by a tenth of a second. 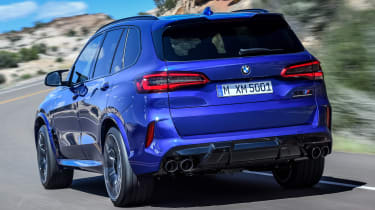 Over longer distances, the gap between the two versions of the X5 M is a bit wider. From 0-124mph the 592bhp car takes 13.7 seconds, with the 616bhp Competition variant a little quicker at 13.4 seconds. Both are electronically limited to 155mph flat out, with an optional M Driver’s Package capable of lifting the limiter to 180mph.

The engine is held in place by all new, stiffer mountings while a unique exhaust system with two 100mm tailpipes refines the V8 soundtrack. Competition models are completed with an M Sport specific exhaust setup.

Drive is sent to a BMW xDrive four-wheel-drive setup through an eight-speed automatic transmission. As ever, BMW claims a rear-biased distribution of power, with drive only ever sent to the front axle when the vehicle’s various sensors and systems detect that the rear will break traction, while torque can be fully distributed between the front and rear axle. A special 4WD Sport driving mode directs additional torque to the rear, and BMW claims it’s possible to perform controlled drifts with this mode enabled. 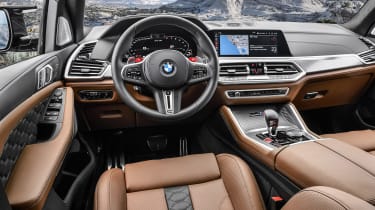 To keep the mass in check BMW has equipped the X5 M with new multi-piece tower-to-bulkhead struts under the bonnet. The front suspension is a double wishbone setup while the camber angles of the front wheels have been increased to promote a sharper turn-in. The rear suspension is a multi-link setup, with another bracing strut placed near the rear axle for additional rigidity.

Electromagnetic dampers are equipped, using data on body movement, road surface conditions and steering movements to allow for continuous adjustment of the damper settings. The basic damper setup can be altered by flicking through the drive mode selection, with Comfort, Sport and Sport Plus modes. Stopping power is provided by six-piston fixed calipers and drilled 395mm brake discs at the front, with single-piston calipers and 380mm disks at the rear.

Design wise the X5 M receives an aggressive makeover compared to the regular X5, with a visibly wider track, a new front bumper with angular, cut air vents and a new rear end with a large rear diffuser. 21-inch wheels are standard, with Competition variants fielding an offset setup with 22-inch wheels on the rear. Gloss black exterior detailing also marks out the M-division newcomer, as does a new roof spoiler.

The X5 M goes on sale in the UK this April, and as has been the case with other recent M-division models, only the Competition variant will hit the UK market, priced from £110,610.

Do you like the look of the new BMW X5 M Competition? Let us know your thoughts below... 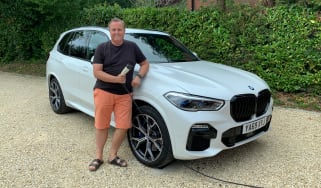 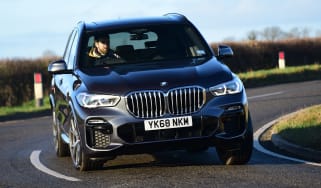 Will the all-electric power of the Jaguar I-Pace reign supreme or will the BMW X5 or Porsche Cayenne come out on top? We test all three to find out...
New BMW X5 M Competition 2020 review 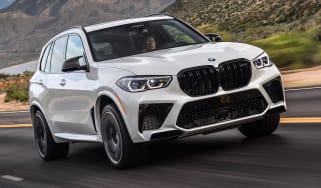