The Range Rover Sport SVR has received a host of tech and interior upgrades. Oh, and it now packs 567bhp... 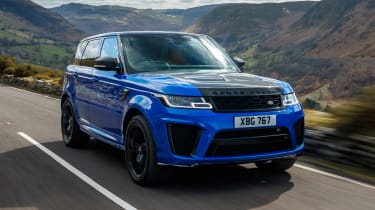 The Range Rover Sport SVR is the latest model to receive the firm’s updated 5.0-litre supercharged V8. The SVR didn’t need any more power, but the fact it’s been given some, isn’t something to moan about. It’s still an immensely satisfying, mad and unhinged performance SUV, offering all the image, character and speed you’d expect. Now, with the tech and interior upgrades shared with the rest of the facelifted Range Rover Sport range, the SVR is a little more luxurious, too.

The Range Rover Sport SVR was the first production car to emerge from Jaguar Land Rover’s Special Vehicle Operations (SVO) skunkworks back in 2015. Since then there has been the Jaguar F-Type SVR and the Range Rover SVAutobiography, as well as a handful of limited-run special editions. Later this year, it’ll be joined by the Jaguar F-Pace SVR, too.

To ready the Sport for this impending family feud, SVO has fettled its original project for 2018. Headlining the changes is the fitment of the brand’s latest, most powerful 5.0-litre supercharged V8. Fittingly, the Sport SVR now gets the same power output as the F-Type SVR and the XJR 575 – so that’s 567bhp (575 in metric ‘PS’) and 700Nm of torque. That’s 33bhp and 80Nm more than the old Range Rover Sport SVR; it’s 0.4 seconds faster from 0-60mph, while top speed has bumped from 162mph to 176mph.

Naturally, the SVR gets a new nose like the rest of the Range Rover line-up, so there are slimmer ‘Pixel’ LED headlights with a new daytime running light graphic and a new grille. There’s a new front bumper with larger air vents to improve brake cooling and a new rear bumper with differently styled exhaust tips for the four tailpipes. The bonnet is now carbon fibre, with large air slots just to reinforce the SVR being the lairiest Range Rover Sport. 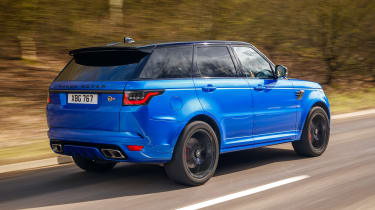 There are new colours, the choice of 21 or 22-inch wheels, and new styling packs. Land Rover claims the Carbon Fibre Exterior Pack is ‘tasteful’, but in reality it’s anything but. Here, the bonnet gets a wide strip of lacquered carbon fibre, as does the grille, side wing vents, mirror covers and trim on the front bumper and tailgate.

On the inside you’ll find the twin-screen set-up pinched from the Range Rover Velar, which is now used across the Sport range. There are new trims and colours and new sports front seats, which are 30kg lighter than before. It’s a suitably luxurious set-up, and fit and finish is up there with the range-topping long wheelbase Range Rover SUV.

Apart from the newly tweaked V8, JLR’s engineers have mostly left the SVR alone. There has been some work on reducing pitch under hard acceleration and braking, and the damping has been tweaked to improve turn-in, body roll and mid-corner stability – but the SVR of today is similar to what went before. That’s a good thing because the Sport SVR is a different animal from, say, a BMW X5 M; the Brit’s brutish character makes the Bavarian SUV seem a little muted. 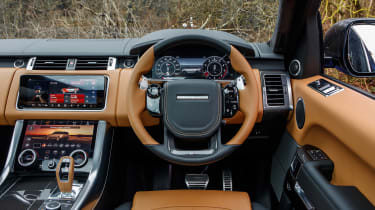 And the most thuggish part to the SVR’s character is the engine. Acceleration is thunderous and feels frankly ridiculous when you’re perched up so high. You quickly come to the conclusion that something that weighs over 2,500kg has no right to be this fast.

Happily, the extra power and torque is spread through the rev range, and you can feel that extra surge every time you squeeze the throttle. Hearing the supercharger working harder than before is a joy, too. Quite ridiculously, the changes have added a little extra glitz to what was already a pantomime car.

The SVR was never a pantomime horse through the corners though – and there’s no change here either. While Land Rover says there has been some work done to the damping, the SVR was always surprisingly agile, so it’s hard to feel the differences. There’s still a marked difference to the ‘regular’ Autobiography Dynamic model, though, with the SVR generating colossal grip through the corners and a heavy, planted feeling in a straight line.

Flick to Dynamic mode on the Terrain Response knob and the SVR’s already mental character changes to ballistic. With the exhaust baffles fully open, the steering weighted up, the gearbox in its most aggressive setting and the engine in its most unhinged mode, the SVR feels like a proper weapon.