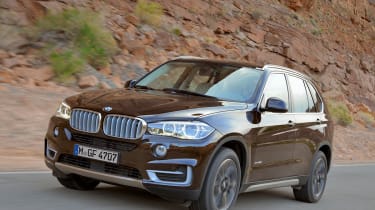 The petrol-powered BMW X5 is an extravagance that will be sampled by very few. And while they will get a lovely sounding engine that delivers impressive performance, it doesn’t manage the accomplished all-round performance of the 3.0-litre diesel. If performance is what you’re after, we’d say wait for the X5 M50d - which will have a similar price and is expected to arrive in December - even if that means not having a petrol engine under the bonnet.

Almost every new BMW X5 sold in the UK will be powered by one of four diesel engines. But for that three or four per cent of buyers who just can't live without a petrol engine, you can opt for a petrol-fuelled 4.4-litre twin-turbo V8.

It gets off to a great start when compared with the xDrive30d. As, although the diesel engine sounds surprisingly throaty, it can't compete with the rumble that blurts from under the bonnet when you fire up the V8. The engine's smooth soundtrack is a real plus-point, offering a nice, rich warble under light acceleration that turns into a high-pitched howl not that far off the previous-gen X5M that uses a version of this engine.

That noise is backed up by fierce acceleration for a car with such large dimensions and weighing over 2.2 tonnes. BMW claims 5.0 seconds for the 0-62mph sprint, and it feels every bit that fast as you power away from a standstill. Even better, it makes mincemeat of overtaking slower traffic, although enthusiastic driving will mean fill-ups become a tedious regularity – expect low 20s mpg in real-world driving.

When you're not driving hard, the engine is extremely quiet and refined, with only a slight rumble through the wheels to be heard.

There are four driving modes to choose from. Eco Pro seems a tad academic in a big, petrol-powered SUV, but it dulls the throttle and dials down the air-con a little to save fuel. Comfort is the default mode and gives the best mix of comfortable ride and agility from the chassis.

In Sport or even-more aggressive Sport+, the throttle response is nice and sharp and the body feels really well tied down. But the good work done by the chassis and engine is undone by the steering.

The electric power steering doesn’t have any feel in any mode, but is suitably heavy in Sport or Sport+. More concerning is its hesitance when you turn into bends, with a distinct lag between you turning the wheel and the car responding.

This inconsistency leads you to need to make lots of small, mid-corner adjustments to your line. As the driver it’s a tad annoying, but it’s maddening for passengers as it gives them a really jerky ride.

All cars come as standard with BMW’s excellent eight-speed auto gearbox. However, while it’s super-smooth in the diesel, and is an excellent match for the power and torque produced by that engine, the higher-revving, higher torque nature of the petrol overwhelms the gearbox when in Drive. It’s fine in manual mode, but never quite seems to know what gear to be in when left to choose ratios by itself. On this one, we’d go with the majority – the xDrive30d we drove last week is the smarter choice.