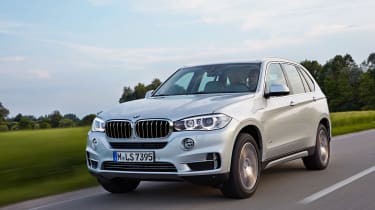 The BMW X5 xDrive40e is a hugely competent and sophisticated machine. It offers an intriguing alternative to diesel power, while the seamless powertrain and trademark BMW attention to detail make it as desirable as any other X5. You’ll have to put up with a firmer ride and make compromises with passenger and luggage space, but it’s a positive and promising insight into BMW’s hybrid future.

BMW is beginning to dripfeed technology from its i brand back into the mainstream model line-up, and the X5 xDrive40e is the first of a wave of new plug-in hybrids from the company. Following in its footsteps will be a 740e and 330e, which have both been confirmed for next year.

This SUV mates a turbocharged 242bhp 2.0-litre four-cylinder petrol engine with an electric motor to produce a total output of 308bhp. An eight-speed automatic gearbox provides drive to all four wheels, resulting in a 0-62mph time of 6.8 seconds and top speed of 130mph. 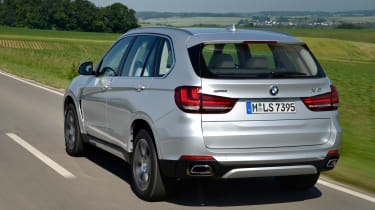 But it’s not the performance stats that make impressive reading – it’s more the X5’s green credentials. BMW says the Drive40e can return up to 85.6mpg while emitting as little as 77g/km of CO2 – that’s some way off Volvo’s claims for its plug-in XC90 T8, but not bad considering the hefty 2,230kg kerbweight. There's also an all-electric range of 19 miles and a full battery recharge time of around three hours.

However, the main question is does it all work? In short, yes – and rather well, too. As with most PHEVs, a range of driving modes allows you to run on electric power alone, charge the batteries on the move or be ushered along with the engine and electric motor working in tandem. Where the X5 xDrive40e differs from the norm is with its sophisticated navigation system. 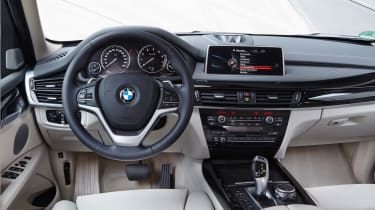 If active, the BMW will automatically select the most suitable mode for the conditions without you having to lift a finger.

In full electric mode the X5 feels lively, surging forward cleanly and silently, yet when the engine fires up the serenity isn’t spoiled – it’s a fantastically quiet and smooth powertrain for the majority of the rev range, getting vocal only beyond 4,500rpm. The way the combustion engine powers on or off when the BMW is marshalling things in Auto eDrive is seamless, although we’d say that with both motors working together the car never feels particularly fast. A heavy right foot will also see that claimed economy figure come crashing down. 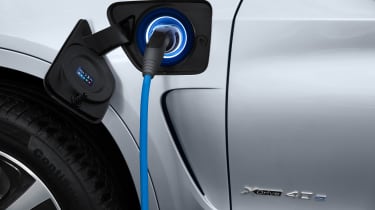 But everything else is classic X5: a capable chassis, fabulous gearbox and great cabin with BMW’s brilliant iDrive infotainment system. It’s also hard to tell the xDrive40e apart from the rest of the range, aside from subtle badging and a front wing charging point.

Unfortunately, there are compromises. On 19-inch wheels and with the batteries’ added bulk, the ride is a little busy and struggles slightly to contain the added mass. And as the eDrive tech goes under the boot floor, the part-electric X5 comes only as a five-seater. You’ll also have to sacrifice 150 litres of boot space, which drops to 500 litres to accommodate the batteries.