American brands like Cadillac and Chevrolet, and even the city's motor show are now irrelevant to UK car buyers, says Mike Rutherford 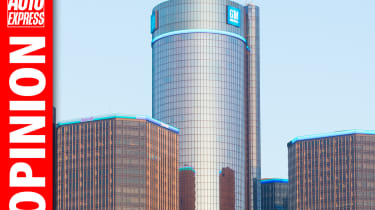 Remember Levi Strauss, Kodak and Tower Records? They were great US brands. But in Britain, they’re now at worst dead and gone, or at best limping along.

It’s a similar story with three US car marques; Cadillac, Chevrolet and Chrysler. The harsh truth is these old-school, heavy-metal firms are now almost irrelevant as far as British consumers are concerned.

The same goes for the factories in their home town. Every dog has its day, and Detroit, Cadillac, Chevrolet and Chrysler have all had theirs. Currently, they’re about as important to new car buyers in the UK as Longbridge, Rover, Riley and EJYR Rutherford (maker of the Rutherford steam car).

Times and tastes of Brits have changed. American cars have shed their ‘gotta have it’ qualities. Detroit is a ‘has been’ location.

• "American cars aren't as desirable as they used to be"

David Bowie often lived, worked and played in and around the Motor City, arguably the roughest place in America. His 1973 classic, Panic in Detroit, was – like the great man – way ahead of its time.

The song mentions cars, traffic lights, diesel (I told you he was ahead of the game!), cops, guns and Che Guevara. What all this is about is anyone’s guess, but I reckon it’s a hint that the city was in such a mess, it seemed to descend into panic mode.

After all, Motor City kept pressing the self-destruct button. It’s “the most dangerous city in America,” according to Law Street Media. Plus the previous population of almost two million is now nearer 700,000, even if Downtown Detroit is showings some signs of regeneration.

That exodus was partly due to the crime rate, but largely because the ‘Big Three’ – General Motors, Ford and Chrysler – shipped Detroit factories and jobs to other places. Sensibly, the likes of Tesla, JLR and Bentley steered clear of the Detroit Motor Show last week.

Everyone knows it’s in the wrong place at the wrong time. As if the murderous streets, redundant factories, mass evacuations and iffy motor show aren’t enough reasons to cause panic in Detroit, here’s another: Between them, Cadillac, Chevrolet and Chrysler registered only around 150 cars in Britain last year. Over here, the brands are now toast.

What do you think about the state of Detroit's car industry? Let us know in the comments!