Four-door coupe concept brings Cadillac bang up to date, with a futuristic interior and 4.2-litre V8 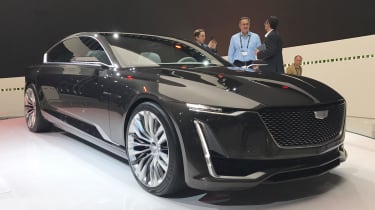 Cadillac's luxury four-door coupe concept, the Escala, has been unveiled to the public at the 2016 Los Angeles Motor Show. It's much like the BMW 6 Series Gran Coupe and new Porsche Panamera, but comes with American style by the bucket-load.

The name Escala is close to Escalade – which refers to Cadillac’s massive 8-seater luxury SUV. But apart from their luxury aims, the two vehicles couldn’t be less similar - the Escala is low, sleek and stylish. It’s based on the same platform as Cadillac’s existing CT6, but the wheelbase has been stretched by 4.7 inches and the car is six inches longer overall. 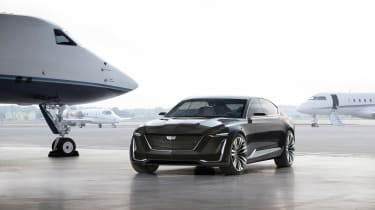 At the front sits a new interpretation of Cadillac’s classic grille, framed by slim LED headlights and bold, L-shaped daytime running lights. The whole design is rather more delicate than Cadillac’s current line-up – the A and C-pillars are thin by a modern car’s standards, and the wing mirrors are tiny.

The window line is framed with lashings of chrome, and there’s a panoramic glass roof to ensure the interior feels as airy as anything else on the road. Round the rear, boomerang-shaped LED taillights adorn a back end with simple creases.

It’s inside where the designers have gone wild, though. The dash was designed in partnership with LG, and eliminates all analogue dials and gauges (as is the fashion). In their place, super-sharp OLED screens display all driving data such as speed, sat-nav info and media, with the rest of the cabin offering a more minimalist feel. It takes the fight to the likes of Audi's Virtual Cockpit and the Mercedes' digital dash.

New features allow drivers to sync their smartphone calendar to the system, producing journey and schedule information while on the move. The menus feature neat 3D graphics, while the narrow-spoked steering wheel is a throwback to Cadillacs of the 1960s and 70s. The dash itself is clad in leather and fabric, adding to the luxury feel. 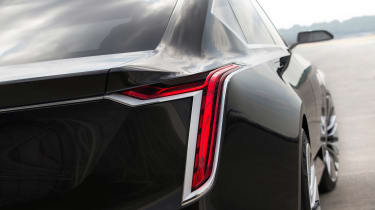 Under the bonnet sits the ultimate all-American engine – a 4.2-litre V8. Instead of being a big, lazy muscle car engine, though, it features twin-turbochargers and cylinder deactivation to aid performance and economy. It could feature in future production Cadillacs – maybe even the CT6, which shares the Escala’s platform.

Whether Cadillac will put the Escala into production remains to be seen, but Cadillac’s CEO Johan de Nysschen said "Depending on the development of the market segment for large luxury sedans, Escala is a potential addition to our existing product plan."

What do you think of the Cadillac Escala concept? Let us know in the comments below...