Royal cars: Monaco prince opens the doors to his collection 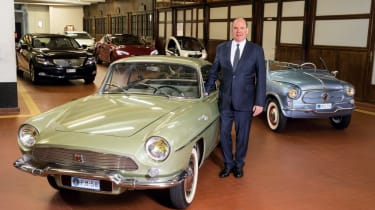 The little boy with blond hair slides under the barrier, grabs the door handle of the Porsche 911 Carrera RS 2.7 and slips in. He then runs towards a model from the twenties, pulling himself up on the driver’s seat. Hot on his tail is his blonde twin sister as the two romp through Monaco’s ‘Top Cars Collection’.

Yet museum director Philippe Renzini remains surprisingly calm, smiling at the wild goings-on. Everything is in perfect order; the two little visitors are allowed to play here. The 120 exhibits belong to their father: Prince Albert II of Monaco.

Royalty extends far and wide in Europe, and with the UK still glowing from the royal wedding that took place earlier this month, Prince Albert II invited Auto Express to look at his personal car collection, now a museum open to the public.

We follow the twins, Princess Gabriella and Prince Jacques, as they work their way up to an old London taxi. Their grandmother, the actress Grace Kelly, who later became Princess Gracia Patricia, had discovered the Austin during filming in England in the fifties, and because of the enormous space inside, it quickly became the family carriage.

A chauffeur sometimes drove her and the children through the principality, and even after all these years, Albert still remembers details of the car, including the luggage rack. “It was attached to the outside of the passenger seat to transport suitcases. As a child, it was always my dream to stand on it while driving,” says the Prince.

For photos, Prince Albert has brought two special cars that remind him of his past, a Renault Floride and a Fiat 600 Jolly. Both were built in 1959 and are parked in front of what used to be a horse stable – the names of the steeds still present on the wood. “When I see the Jolly, I automatically think of summer,” says the Prince. 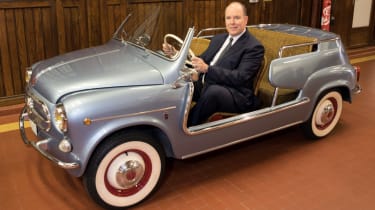 The Renault reminds him of another time. “In 1975 I was in the Floride coming back from a birthday with my sister, Caroline. She drove because she already had a driver’s licence. I sat in the passenger seat. We had a breakdown, and couldn’t get the car moving again. In the end, palace employees had to pick us up.”

Albert’s mother, Princess Grace, was given the car by Renault – and another found its way to French actress Brigitte Bardot. Why was the manufacturer giving cars away? Simple. It wanted to adorn itself with the splendor of the two Hollywood stars.

Albert was far more down to earth when it came to his first car – a VW Golf LS automatic. “Two years later, I switched to a GTI, which was really fun,” he tells us.

The Prince then received a Corvette and later he bought a Porsche 928. “The Porsche was one of the best cars I had,” he says. “Everyone was concentrating on the 911 back then. In the 928, however, I always felt safe because it was taller and drove very well. You did not realise how fast you were going.”

And while the principality is still frequented by many Porsches, loud Ferraris and other exotica – along with the Formula One circus each summer – you’ll also spot a rise in the number of quiet hybrids and electric cars. Environmental protection and air quality is important in Monaco. “[In the future] we will reminisce about the days when we were allowed to drive fantastic cars,” Albert explains. 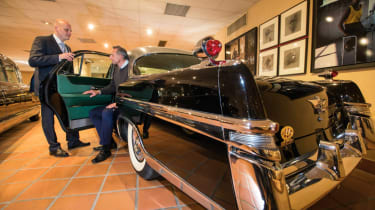 “But I’m afraid all those characterful engines and traditional powertrains will soon be a thing of the past. We’ll marvel at them in museums and get them out every now and then to make a round. With a growing global population, especially in cities, cars with an environmentally friendly drive are the only way to hopefully improve air quality,” the Prince adds.

“It is no longer a question of whether we do that, but when. Many say that’s a modern way of thinking. But the first cars already had electric drive. So we’re just going back to a good old idea.”

Even the wedding car of Albert and his bride Charlene Wittstock from 2011 features an electric drivetrain. The specially built Landaulet Lexus LS 600h wedding car can be found in the museum as well.

The museum also has a workshop, run by Claude Mas, a 51-year-old who shows us the rooms where he and his employees look after the 120-vehicle fleet. On two floors are the paint shop, lift, offices, parking spaces and workshop. Even a lathe is available. “We can even make some spare parts for old cars that are no longer available,” says Mas. 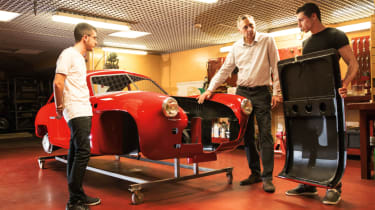 Many of the cars in the collection were also used by Albert’s father, Prince Rainier III, as official state cars. One was the 1956 Chrysler Imperial, which Rainier purchased for his wife Princess Grace, to prevent the Hollywood star in faraway Monaco getting homesick.

But are there any wishes left unfulfilled? Museum director Philippe Renzini would like to bring the Rolls-Royce Silver Cloud III Rainier and Princess Grace used at their wedding in 1956 to the exhibition. “There still has to be this car, I’m sure of that,” says Renzini. And what does Prince Albert personally dream of? “I was put on the list for one of the first McLarens,” he tells us. “But in the end it was too expensive for me.”

Instead, the head of the state is now focused on future issues. Speaking about autonomous cars, Albert says: “Of course, this technology will make traffic easier to regulate and secure, especially in cities. But for me, it’s hard to imagine that you will take away the fun of driving on your own. If you want to drive yourself, you should be allowed to do so in the future. If you take away the pleasure, you take a lot away from driving.”

It’s perhaps unusual to hear a head of state speak so fondly of vehicles, but petrol runs deep in the Grimaldi bloodline. Prince Albert I (1848-1922) was known to make the 600-mile journey from Monaco to the family residence in northern France between 1902 and 1904 on a Humber 350 motorcycle. He travelled over 10 days on dirt roads, where the biggest threats at the time were horseshoe nails.

In fact, anyone doubting whether the family no longer has petrol in their veins should spend time at the museum. And with a little luck, they’ll run into the next successors of the Grimaldi line, Prince Jacques and Princess Gabriella, poring over the cars with childlike curiosity.

Cars are starting to go silent and switching to electricity in the principality, but its love of motoring is never likely to disappear.

Enjoyed taking a look into this exclusive collection? Then why not have a read of our feature where we visited the Jaguar Land Rover Classic Works factory.