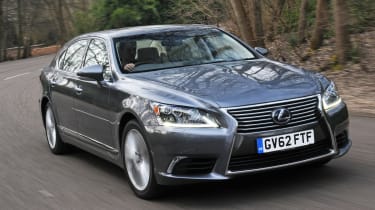 Lexus was once the only brand to offer a hybrid flagship, but rival petrol/electric cars from Audi, BMW and even Porsche make the LS feel even less relevant now. While it offers superb luxury for those in the rear, there’s little for the driver to get excited about. Throw in a sky-high price and average fuel efficiency, and it’s easy to see why the LS 600h will be a rare sight on UK roads.

Until the McLaren P1 and Ferrari LaFerrari hypercars arrive later this year, the Lexus LS 600h is the most powerful hybrid money can buy. But does power equal driving pleasure? We tried the near-£100,000 Mercedes S-Class rival on UK roads for the first time to find out.

Lexus pioneered petrol-electric tech and has sold 500,000 hybrids worldwide, butconventionally powered cars are still far more popular. After numerous customer requests, the V8-only LS 460 has been reintroduced for 2013 to sit alongside the hybrid model. And Lexus predicts that the cheaper, quicker LS 460 will account for most of the UK sales of this facelifted version.

To distance this top-spec car from the rest of the range, it’s only available with a long wheelbase, and in L Premier trim. On the outside, the refreshed LS gets the latest family styling cues from the new GS and IS models, and the gaping ‘spindle’ grille and wraparound LED rear lights help sharpen up the looks.

From nose to tail, the hybrid is more than 5.2 metres long, and the heavy electric motor and battery pack mean it tips the scales at almost two-and-a-half tonnes. As a result, it feels like a real beast from behind the wheel.

Nestle into the standard heated and cooled leather seats and you’re confronted by a technology-laden interior that features a mix of expensive wood and leather finishes and the kind of exacting build quality you would expect for the eye-watering price tag.

Despite a combined output of 439bhp driving all four wheels, the hybrid LS is most comfortable at low speeds, where the electric motor and batteries regularly intervene for near-silent running. Push it harder and a quiet rumble from the 5.0-litre V8 can be heard, but the spongy throttle and the need to push it hard mean the Lexus is no cleaner than powerful V12-engined rivals such as the BMW 760Li.

Flick through the various settings for the adaptive air-suspension and it’s hard to tell the difference between Sport+ and Comfort modes – and the car tends to wallow around tight corners in either setting. The regenerative brakes also take some getting used to, and the CVT gearbox is very easily confused.

Other drawbacks to the hybrid include a boot that’s 120 litres smaller than in the standard car. While it should be cheaper to run than the petrol model, all of the LS’s conventional diesel rivals offer the same level of efficiency for a fraction of the asking price.

Equipment highlights include a booming 19-speaker Mark Levinson stereo, electric massage seats for rear passengers and an advanced climate control system. The massive 12.3-inch central display is the biggest in its class, but the sat-nav and infotainment unit is tricky to use, and it feels two generations behind the latest MMI and iDrive systems from Audi and BMW respectively. In fact, the only options available are a night-view camera and metallic paintwork.