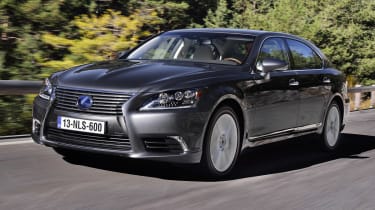 The new LS 600h is outclassed in almost every way by rivals featuring conventional diesel engines. Its case is made even shakier by the introduction of hybrid luxury models such as the BMW ActiveHybrid 7 – not only does it significantly undercut the latest Lexus on price, it is better to drive and more efficient.

For four years, Lexus sold its LS only as a hybrid, but with the new V8-engined LS 460 set to take 80 per cent of sales, where does that leave the petrol-electric LS 600h flagship?

It’s no longer the only petrol-electric car in this class, as BMW now offers its ActiveHybrid 7 – which is also about £30,000 less in long-wheelbase form. But the Lexus has the edge for kit, with electrically reclining rear massage seats that are heated and cooled, plus a climate control system that uses infra-red sensors to monitor the temperature of passengers’ faces and adjusts accordingly.

Trouble is, the LS 600h falls behind again on performance. Its hybrid drivetrain delivers 439bhp to take the car from 0-62mph in 6.1 seconds, but that’s almost half a second down on the BMW. The Lexus also trails on efficiency, returning 32.8mpg and emitting 199g/km to the ActiveHybrid 7’s 41.5mpg and 158g/km.

Key to the LS 600h’s appeal are its near-silent progress and incredible ride comfort. Yet it’s difficult to drive the car using the electric motor alone, so it’s not as relaxing or quiet as it could be.

And while Lexus claims to have made the LS better to drive, the steering is still too light and there’s lots of lean in bends. Fiddling with the driving modes, including Sport and Sport +, doesn’t help much.

Lexus expects most buyers to travel in the back of this LWB-only model, and it’s very comfortable. But rivals are just as cosseting – plus cheaper and more efficient.