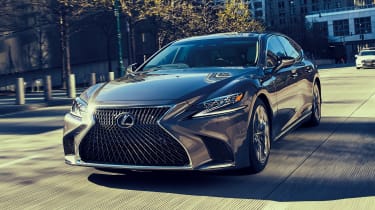 We like the fact that Lexus has taken a different path with the LS, rather than trying to play the big German brands at their own game. It means the new Lexus limo offers a genuinely different and tempting alternative to the norm that will win it plenty of fans. Is it better than a Mercedes S-Class? No. But with an S-Class almost as common as taxis in some major cities, the new LS is more likely than ever to tempt over a wide pool of luxury car buyers.

For years, Lexus has been chasing the big German makers for luxury, dynamics and quality, but each time it has missed by a country mile.

But things have changed at Lexus, and more recently the company has taken a more confident approach – embracing its Japanese origins to create cars that provide a refreshing change from the European norm.

We’ve already seen that with the IS saloon, NX and RX SUVs and the stunning new LC coupé – individual, sharp-edged styling being the door opener for a new breed of Lexus customers. Now it’s the turn of the LS flagship – a car that has been so fixated by the Mercedes S-Class in the past, that it has been something of a doppelgänger. Not any longer. 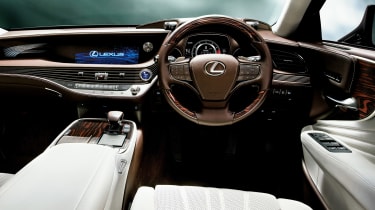 Although the S-Class is still the standard setter, the new LS ploughs a different furrow with more head-turning styling and a cabin that highlights Japanese Takumi craftsmanship rather than Teutonic efficiency. From the oversized spindle grille and narrow headlamps through a lower-looking, almost coupé-like profile to the smart rear end, the new LS is one of the best looking luxury cars on the market.

The same can be said of the inside, which has been inspired by Omotenashi, the Japanese art of hospitality. It's dominated by technology with a large 12.3-inch infotainment screen and a wonderful 24-inch head-up display. Even the previously infuriating remote touch system has been freshened-up and works much better than before – although systems from Audi, BMW and Mercedes are still easier to use.

Unfortunately, quality inside is a small step behind what Mercedes currently has to offer, too. While the Germans are boastful that there’s no plastic to touch in an S-Class, you’ll still find it dotted across the switches and buttons around the LS’s cabin – the window toggles and mirror controls, for example. If you haven’t been in an S-Class, you’d still be impressed, but the game has already moved on.

The same can be said of the leather that tops the dash and doors – it doesn’t quite feel as sumptuous as in the LS’s arch nemesis. However, the Lexus’s design is a joy and very different to anything comparable – with swooping lines and some delightful design touches that are typically Japanese in their appearance.

Takumi craftsmanship is evident throughout: there’s wood produced with the help of the people who make Yamaha pianos, hand-cut Kiriko glass panels and intricate hand pleated door panels all available as options.

The new LS sits on the new Lexus Global Architecture – Luxury (GA-L) platform, which we’ve already seen put to good use in the impressive LC coupé. It uses multi-link suspension at the front and the back, with an adaptive air set-up to further soften the ride. Indeed, it’ll firm things up slightly if you select Sport or Sport + mode, though few buyers will do so in reality. 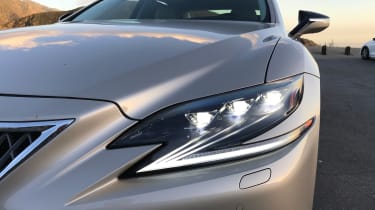 And the ride is seriously impressive, dismissing the dreadful surfaces of the Californian freeway of our test route, as well as some pretty rotten local roads, too. It’s quite close in comfort to an S-Class, while refinement almost matches the Merc, too. Only a little noise through the suspension will break the silence, as the big wheels and tyres trample over cats eyes or potholes. The Lexus remains impressively quiet, helped by active noise cancelling tech inside.

Up in the twisty hills overlooking Los Angeles, we were able to drive the LS in a manner most people wouldn’t – and again it impresses. Body control is pretty good, especially in the sportier modes, but the steering is too light and lacking feedback in Normal mode, and just seems to become a bit stickier if you twist one of the two horns sticking out of the instrument binnacle (as on the LC) to get into the two sporty settings.

It’s here that we were able to enjoy one of the highlights of the new LS – its engine. UK buyers will only have the option of the innovative multi-stage hybrid that we’ve already seen in the LC Coupé, but our US car had the 3.5-litre 416bhp twin-turbo V6 under its low, long bonnet that won’t be coming to Europe.

That’s a shame; for most of our drive, you’d be forgiven for thinking you were in the hybrid with electric power – it really is that quiet. The 10-speed auto slips seamlessly between ratios, too, boosting the refinement inside. But floor the throttle and the LS springs to life with a sporty engine note that will wake the rear passengers and delight the driver. With 600Nm of torque, acceleration is pretty swift, too – Lexus claims 0-62mph in 4.8 seconds.

Most important for most buyers, though, will be the rear accommodation, and with a longer wheelbase than the outgoing long wheelbase LS, you’ll not be wanting for legroom. The rear seats are plush yet supportive, while the doors open wide to make getting in and out easy in spite of the car being lower than before – even though it raises automatically when the car stops.

And while the quality in the back is just as impressive as in the front, our only reservation is on headroom, as taller passengers will find themselves sitting surprisingly close to the roof. They’re unlikely to touch the headlining, but there’s not as much space in the back or the front as in rival luxury models.

Where the LS does compete is with regards to tech – not only with those massive displays in the front (offset by a smaller and overworked circular driver display), but with the offer of an impressive Mark Levinson audio system, the latest autonomous driving technology and an advanced safety system.

It includes the world’s first intuitive pedestrian detection function with active steering, too. It can spot a pedestrian on the road ahead and if a collision is imminent, this system will automatically apply the car’s brakes and steer around the person, while keeping to its traffic lane. Clever stuff.