The petrol-engined Lexus LS is big on refinement, but the lack of a diesel option could hold it back 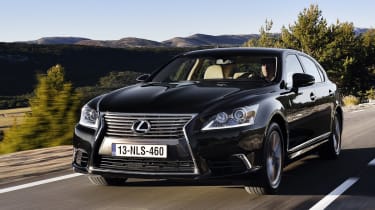 Lexus has broadened the appeal of its flagship saloon, not only by adding this non-hybrid petrol V8 to the LS 460 range, but by increasing the list of standard equipment and adding a dash of style. Unfortunately, the cabin still doesn’t have the effortless luxury of its premium rivals, and the car isn’t quite as dynamic to drive, either. But in almost every other way, it’s up there with the best. The big letdown is the lack of a diesel engine – this V8 model is thirsty and expensive to tax.

The Lexus LS has always been a bit-part player in the UK luxury car market – so Lexus has refreshed its limousine in a bid to address that problem.

The biggest news, however, is the reintroduction of a petrol V8 to the previously hybrid-only range. The 5.0-litre V8 600L hybrid continues as a £100k flagship, still returning only 32.8mpg, but Lexus predicts that this LS 460L (for Luxury) will make up 80 per cent of UK sales.

There’s still no diesel, so the manufacturer will struggle to rack up big sales, but Lexus expects to shift around 300 LS 460s here every year. Prices start at £71,995, and for that you get a lot of car. Not only is the LS big, it feels really well built – even the steering wheel takes 38 days to make.

It’s packed with technology, including a ‘Climate Concierge’ that monitors the temperature of each occupant and adjusts the climate control accordingly. Also, a 12.3-inch central display helps modernise the cabin.

Compared to the luxurious simplicity of the new Range Rover or Audi A8’s interiors, the LS feels cluttered. And the Remote Touch Interface, which controls a lot of the systems, is ungainly.

While the car is comfortable, with the benefit of heated and cooled seats front and rear, it doesn’t quite pull off its luxury status in the way a Jaguar XJ or even a Mercedes S-Class does.

Once on the move, however, the Lexus proves to be more than capable of holding its own against premium rivals. It has a reputation as one of the most refined cars on the market, and this new model feels better than ever. The 4.6-litre V8 is only ever heard when you push the accelerator all the way to the floor, and even then it’s muted.

The LS 460L builds speed relentlessly, and can sprint from 0-62mph in 5.7 seconds. Drive it gently, and the eight-speed box shifts imperceptibly for an ultra-smooth ride. You might even get close to the claimed economy figure of 26.4mpg.

Lexus wants the LS to be seen as dynamic, with the revisions to the adaptive damping promising greater control and precision. A new Drive Mode Select system also offers the driver a choice of five modes, from Eco to Sports +, but they do little to change the LS’s comfortable character.

In fact, without the instruments glowing red to signify the sportier modes, you’d be hard pushed to tell the difference between the settings. And none of the options does anything to remove the remoteness and lightness of the steering, nor do a great deal to increase the control or accuracy of the suspension.

As a comfortable and refined luxury car, the V8-powered LS 460L doesn’t do a lot wrong, but many diesel-powered rivals offer the same kind of performance and cost almost half as much to run. That fact alone explains why even the most popular LS will sell in such small numbers in the UK.