Hi-tech hybrid limo is given a makeover 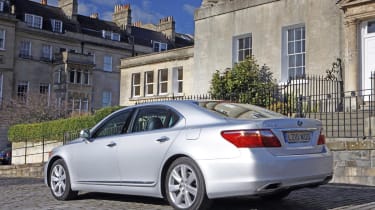 Its clever petrol-electric drivetrain offers a unique and compelling blend of power and refinement, but the LS 600h’s economy and CO2 figures aren’t as good as diesel rivals’. While it’s hugely refined, relaxing, spacious and full of tech, at £90,000, the Lexus is too pricey – and doesn’t beat competitors in any area. The cabin in particular is a disappointment.

AS with the XJ, Lexus’ flagship luxury saloon gets V8 power. But instead of a supercharger to enhance performance, the LS 600h has an electric motor. It’s the only limo on sale in the UK with hybrid technology. So is it green as well as mean?

The revised model brings a handful of improvements, yet its launch coincides with the announcement that owners may soon have to pay London’s congestion charge. As Auto Express reported in Issue 1,117, proposals expected to come into force in January will mean the scheme is based on CO2 output; hybrids will no longer be automatically exempt.

That will instantly remove a large part of the LS 600h’s appeal. Even though it has a petrol-electric drivetrain, the car returns 30.4mpg and emits 218g/km – trailing Mercedes’ latest S350 CDI BlueEFFICIENCY with its 37.2mpg and 199g/km figures. So, without true eco status, can the big Lexus really compete in this market sector?

Changes for 2010 include the introduction of new Brembo brakes, an updated ‘relaxation package’, which incorporates a Shiatsu massage function on the seats, and auto high-beam headlamps.

The bumpers get a mild restyle front and rear, and there’s a range of new colours. Otherwise it’s business as usual – this car is so laden with technology that its options list is virtually non-existent.

Few cars ride as well as the pillow-soft S-Class, but the LS 600h runs it close. At low speeds, the saloon simply glides over bumpy tarmac.

Pick up the pace, though, and body control is excellent, resisting the bouncing motion some softly sprung cars suffer from. Refinement is excellent too, with very little engine, wind or tyre noise. There’s silence when you pull away, but plant the throttle and the 5.0-litre V8 kicks in with a lovely, smooth crescendo: the LS feels every bit as quick as its claimed 6.3- second 0-62mph time suggests.

Build quality is first rate, and both standard and long-wheelbase versions provide masses of space front and rear. But the design of the cabin lets the Lexus down; it has the look of an upmarket Toyota, with an uninspiring layout that’s way behind rivals – and doesn’t befit the enormous price tag.