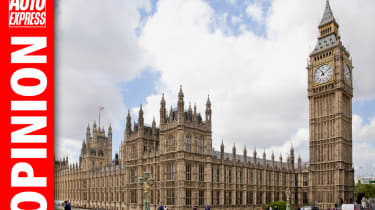 As a dyslexic agnostic insomniac, I often stay up half the night wondering if there really is a dog. Talk radio channels also help me get through the hours of darkness. By 7am I’m hooked on Radio 4. My lunch breaks wouldn’t be the same without the 1pm news bulletin on BBC1. Then afternoons and early evenings consist of driving cars, sitting at a desk, or both... usually with LBC on in the background.

I’m addicted to radio and TV, but one of the consequences is that I’ve just suffered weeks of party political broadcasts, yet hardly, if ever, heard mention of Britain’s 40 million cars, or our 50 million drivers and their passengers.

True, the ruling Conservatives (never forget this is the party that cruelly imposed 20 per cent VAT on cars and other motoring products) did discuss trains and train users.

And the party also said petrol and diesel duties (ie taxes) at the pumps will not be raised – very different from saying they’ll be decreased or, better still, abolished altogether.

The other major parties blanked us, too. Labour (whose leader “loathes” cars); the anti-motorist Lib Dems; the ecomental Greens; now-redundant UKIP and in-limbo SNP all said at worse nothing and at best next to nothing about motoring at their conferences.

At least the climate change industry issued some firm (and rare) advice last week. In case you missed it, you’re broadly instructed to a) stop eating meat; b) buy fewer environmentally harmful cotton and denim products; and c) stop driving comparatively clean petrol or diesel cars. Put another way, if you’re in your combustion-engined car, wearing jeans and a T-shirt, and have armed yourself with an on-board lunchbox containing a ham sandwich and scotch egg, you are the climate change problem. So now you know.

• What is the UK Plug-In car grant?

Thankfully, one senior person working in and around the wonderful world of motorists and motor cars has stepped up to the plate and given buyers a sensible, productive steer they really should listen to if they know what’s good for them. Gerald Killmann, vice-president of Toyota Motor Europe (the world’s largest and most profitable car company that can build full and part-EVs), said petrol-electric hybrids are still a better bet than pure-electrics.

The Government has taken the opposite approach. It announced an end to grants for plug-in hybrids, and a reduction for EV subsidies. With so many mixed messages being sent to drivers, Auto Express’s soon-to-be-launched sister title, DrivingElectric, looks set to offer essential guidance for those keen to be part of the EV revolution. DrivingElectric arrives online next week, and I urge you to head to it for clear-headed expert advice on alternatively-fuelled cars.

Do you think the Government should be doing more for motorists? Let us know in the comments...