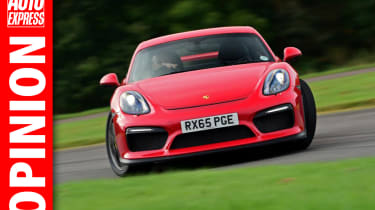 If I had a quid every time I was asked 'What new car should I buy?', I'd be about £37,000 richer by now. Listeners to my 1,000-plus radio phone-in programmes (I did one on the BBC only last week), viewers (there weren't many!) of the motoring advice show I hosted (badly!) on TV, plus readers of the car magazines and newspapers I began writing for in the early eighties haven't stopped asking... and I'm still answering.

Some folk don't take notice. Some do. My mate Bob is in the latter camp. Now he's sitting on - or in - his recently delivered, but now second-hand Porsche Macan that's currently worth more used than he paid new. Happy days! This model, like its stablemates the GT3 and GT4, resides in that 0.1 per cent group that makes it an appreciator, not a depreciator - during the early weeks and months of life, at least.

Does this mean that private consumers should order and place deposits on future Porsches purely for financial investment? No way. As the company correctly points out, volatile and ever-changing market forces are at play here. Such things are way beyond the control of the manufacturer and everyone else come to that.

"As always, our advice is to buy a Porsche to drive it," the firm says. And in a refreshing moment of honesty, it also reminds us that finance, insurance, servicing, garaging and other day-to-day car ownership expenses can quickly eat into any temporary profit a recently delivered 'new' (but technically second-hand) Porsche may generate for its owner.

• Car depreciation: the models that hold their value best

Motorists are often in denial about the rate at which their new cars will (usually) slump or (unusually) increase in value. But my general rule is that over a typical one-to-three year/36,000 mile ownership period, every car will depreciate.

For the customer buying new vehicles, depreciation remains the number one financial killer - the most expensive thing he'll ever 'buy' during his motoring life. Over decades of driving, his depreciation price tags could easily total hundreds of thousands of pounds. If you remain determined to buy a new product, prior to selling it three years later at a profit, visit an estate agent rather than a motor trader. As an investor, what you require is a just-built freehold house with a gas supply, not a factory-fresh car running on petrol, diesel, or electricity.

Would you ever buy a car to make money out of it? Let us know in the comments below...