Should you buy a used police car? A guide to police auctions

If you can stomach a few compromises, you can buy a cheap used police car with an immaculate service history - here's our guide 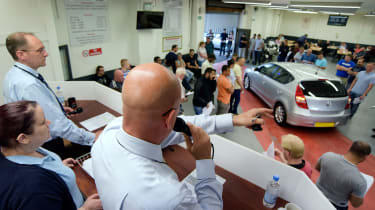 The world is full of used vehicles, so you don’t have to look far to scoop a second-hand bargain. But if you want to save big, how about buying a police car? It won’t mean driving around in something with fluorescent stripes plastered down the sides – by the time a police force disposes of its vehicles, virtually all traces of its blue-light history will have been eradicated.

West Oxford Motor Auctions (WOMA) is the UK’s biggest supplier of ex-police cars; it holds two auctions of them each month. The company’s Ken Hagar tells us: “People assume police cars come only in white and have a really hard life, but nothing could be further from the truth. Most of these cars are driven by highly trained professional drivers with lots of mechanical sympathy, so even after a high mileage many of them are in a better condition than a low-mileage alternative that’s been neglected.

“Also, police cars are always maintained superbly, with no expense spared. Only high-quality parts are fitted and services are often done every few weeks, so any potential buy should have plenty of life left in it.”

Don’t assume that WOMA’s auctions are crammed full of Vauxhall Astras and Skoda Octavia vRSs, either. According to Hagar, as a wide range of manufacturers now offer their vehicles to UK forces, there’s a ready supply of mainstream models such as Ford Mondeos and Vauxhall Insignias. Most will be diesels and ex-motorway cars could have manual or auto gearboxes; it’s not skewed either way. 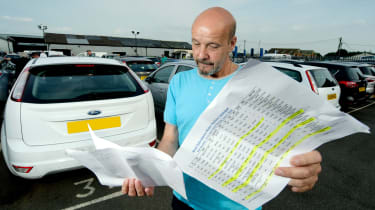 Although many of these vehicles have led quite pampered lives, you should still expect some compromises. Says Hagar: “It’s not unusual for a car’s original music system to be taken out so the police communications kit can be fitted. When this is removed at disposal time, a space will be left in the dash.

“Holes in the roof are common, too. When light bars are removed, a blob of silicone will be put in to prevent leaks. Budget around £250 for a more effective, invisible repair.”

The mileage at which a car is sold on can vary widely. According to Hagar most patrol cars come to market with 70,000-120,000 miles – usually small family hatches such as Astras, Ford Focuses and Hyundai i30s. Motorway patrol vehicles are usually sold on when they’ve covered between 90,000 and 140,000 miles; typical cars here include Volvo V70s, plus BMW 5 Series and X5s.

Gareth Brooks runs expolicecar.co.uk, which buys vehicles at specialist auctions, refurbishes them and sells them on. It’s just sold a 128,000-mile 2011 Volvo XC70 – worth £9,750 in Glass’s trade guides – for £7,800. Also available was a 2008 ex-NHS V50 worth £5,500 according to Glass’s; it could be yours for £3,800. “We don’t include a warranty in the price, although buyers can pay extra for one,” says Brooks. “Our cars have also covered more miles than those you’ll find on forecourts and they’re less likely to be pristine; driver’s seat wear isn’t unusual. But we do slot in a radio, MoT them, replace any missing trim and if necessary we’ll refurbish the alloys.

“Most importantly, these cars will be on the button mechanically and the bodywork will be very tidy, so if you’re looking for honest and cheap transport, an ex-police car can provide excellent value for money.” 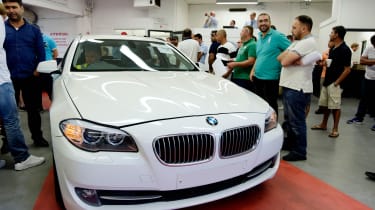 But are cop cars modified? Brooks tells us: “The police don’t disclose whether brakes, suspension or ECU are modified. I suspect they’re not left standard, although I have no proof. Remember, some makers provide cars to police spec, which varies from the models sold at dealers.” When we checked there were worthwhile savings to be made at the Ex-Police Car Centre in Brierley Hill, W Mids. It had a 116,000-mile 13-reg BMW X5 xDrive30d. Glass’s says this ex-motorway patrol car is worth £24,000, but it could be yours for £17,495. Meanwhile, a 132,000-mile 12-reg 530d Touring ex-patrol car, valued by Glass’s at £13,340, was up for £11,495.

The company’s Nicola Finney tells us: “The amount you save varies significantly; it comes down to what we pay for the car. We don’t look at trade guides – we simply buy the car, refurbish it, then sell it on.”

According to Finney, many customers buy ex-police cars for peace of mind. “Most cars have had one owner and come with a full history,” she says. “There are no concerns on finance, yet you still make big savings.”

• Police Ford Mustangs could join the fleet of UK forces 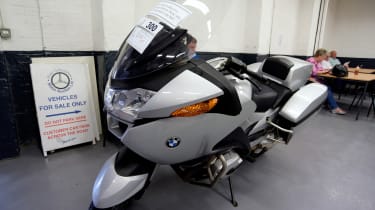 Geoff Taylor chairs enthusiasts’ group Police Car UK (policecaruk.com). He says: “Most of our members buy ex-police cars as a piece of history. But keep the original livery and there’s a minefield of legislation.

“It’s different if you’re running a classic police car as the livery is usually no longer in use and the vehicle isn’t in service. But you’ll still have to abide by National Police Chiefs Council [formerly ACPO] guidelines. This includes not having any reflective decals on the car and not displaying any blue lights.”

"How I copped a bargain" 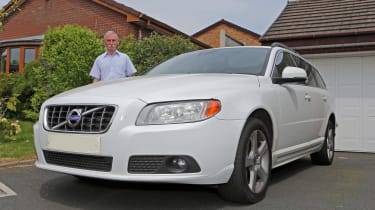 “I bought the Volvo to tow my caravan as the Focus wasn’t up to it,” says Roger. “So far I’m very impressed with the V70, even though it isn’t pristine. The interior has been cut about a bit. Still, the bodywork and paint are in very good condition, and I paid just £7,295. That’s over £2,000 less than you’d expect to pay from a regular trader – although for that you’d get a car that’s cosmetically better.

• Police cars: the best and worst

“What matters is that these cars are maintained regardless of cost and they come with a full history to prove it. The file supplied with mine shows the car has needed nothing more than routine servicing; it’s been completely reliable despite the mileage.

“These cars are also only driven by highly skilled professionals, which is why I’d take one of these over a car that’s done 30,000 miles around town with a normal driver.”

Have you ever owned an ex-police car? Give us your verdict in the comments section below...