Another California based Tesla rival is prepping an all-new EV for 2018, with a 200+mph range topper. 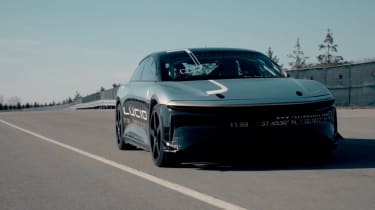 The Lucid Motors Air EV has hit a top speed of 235mph in official testing, according to a video posted by the California based electric car start up.

The standard Air EV - which will go on sale in the United States next year priced from $52,500 - claims 400bhp and a maximum range of 240 miles. A range-topping twin-motor version packing 986bhp is poised to appear too, with a limited top speed of 217mph.

Derestricted and here on camera it's capable of cracking 235mph, while 0-62mph comes in at a claimed 2.5 seconds, rivalling the Tesla Model S P100D.

This version of the Air is claimed to have an all-electric range of over 400 miles, and boasts battery cell technology developed in tandem with Samsung. 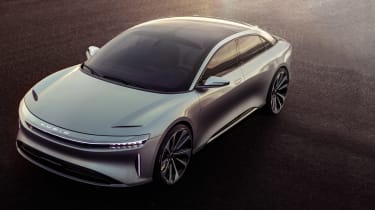 Autonomous technology is another of the Air’s trump cards. Like Tesla’s recent Advanced Autopilot introduction, the Air will ship with all of the necessary hardware for complete autonomy, which will be gradually patched in through a series of software updates.

The released renderings showcase the eye-catching design Lucid is chasing for its car. The front end, with its sleek, thin, horizontal lighting arrangement using micro lenses has hints of muscle car about it. The high shoulderline and thin daylight opening make the car appear low, while the roof is a huge glass panoramic setup.

The Air’s footprint is smaller than conventionally powered rivals like the Mercedes-Benz S-Class and BMW 7 Series, but the clever packaging opportunities afforded by its electric drivetrain mean it boasts interior space on par with larger cars. It seats four people – an armrest and a centre console separate the rear pew – but those in the back are treated to reclining seats and displays which fold down into tables. 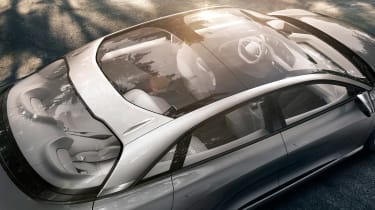 Up front, the cockpit is dominated by display screens. A large digital instrument panel sags behind the steering wheel, and is joined by a portrait-orientated pad in the centre console.

Despite the pictures, Lucid says this car won’t be ready for production for another two years at least. The company hopes to put the Air into production in late 2018, with first deliveries commencing shortly afterwards.

Deposits are being taken now, and the first 250 cars - 986bhp Launch Edition versions - will cost around $160,000 fully equipped. The $52,500 car will hit the market later, with the dual-motor powertrain on the options list.

Is the Lucid Air a load of hot air? Let us know your thoughts in the comments.