All the Presidents' cars: the amazing limos that carry the world’s leaders 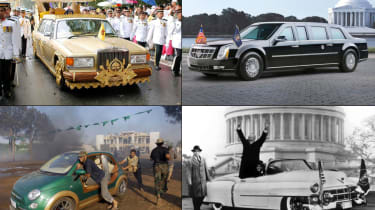 Vladimir Putin revealed his latest Presidential ride months ago, but it has since evolved into the flagship model of a luxury car marque, Aurus. Revealed that the 2018 Moscow Motor Show, the armour-clad Aurus Senat was specially designed for the Russian President but is now available to anyone with deep enough pockets. It’s just one of the world’s most eye-opening presidential cars.

While there are plenty of giant luxury cars in the list below from President Trump’s Cadillac to a golden Rolls-Royce, some dignitaries have been slightly less extravagant, with diplomatic cars ranging from a VW Beetle to a Citroen DS. So read on to find out about the cars the most powerful men and women in the world travel in.

Theresa May – Prime Minister of the UK 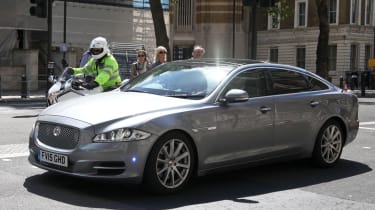 Trump's election win wasn’t the only political whirlwind back in 2016. With the UK opting to leave the EU, David Cameron quickly resigned as PM and was replaced by Theresa May. With a move to No. 10, May was also given the keys to the Prime Minister’s car. She’ll now be driven around in an armoured 5.0-litre supercharged V8 Jaguar XJ, called the Sentinel. Thanks to hardened steel armour, the car is capable of withstanding a blast equivalent to 15kg of TNT. Despite its armour, the Sentinel hasn’t escaped injuries with the roadside infrastructure – it was famously dented by a kerb in Salford, London. 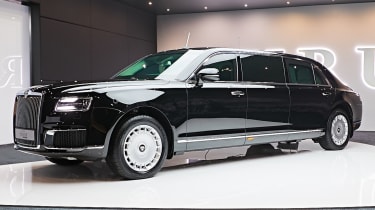 Mr Putin is driven around in a Russian made limo – replacing the Mercedes S600 Pullman previously used – called the Aurus Senat. While details of the Senat are thin on the ground, it is believed to come with a 4.4-litre V8 hybrid producing around 600bhp. This is claimed to result in a 0-62mph time of under 6 seconds.

Putin’s limo was built by the Russian Central Scientific Research Automobile and Automotive Engines Institute (NAMI for short) and even though its specification is classified, it is claimed to be completely bulletproof and to run on solid rubber tyres. Despite being a product of Russia, the Senat looks remarkably like a cross between the Rolls-Royce Phantom and Donald Trump’s Beast – but we very much doubt Mr Putin would agree with us on that… 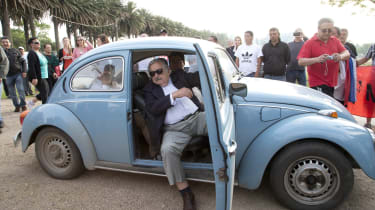 If there was ever an antithesis to Trump’s lavish lifestyle, it’d be that of former Uruguayan president Jose Mujica. When sworn into office in 2010, the man dubbed as the ‘poorest president in the world’ proclaimed his entire wealth amounted to his 1987 VW Beetle – he owned nothing else in his name. By the time he stepped down in 2015, Mujica achieved cult status through his modest living in a ramshackle farm, donating 90 per cent of his salary away and promoting progressive social policies in Uruguay. Throughout the five years, the Beetle remained with Mujica who was often seen driving it. He’s since been offered $1 million for the car. 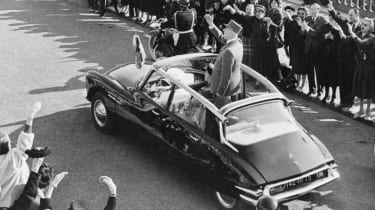 On 22 August 1962, France’s president Charles De Gaulle and his wife were riding in the back of a Citroen DS when 12 armed gunmen opened fire and shot 140 bullets at the black Citroen DS in protest of France granting Algeria its independence.

De Gaulle’s life was saved by the Citroen’s innovative self-levelling hydro-pneumatic suspension that stabilised the car and allowed the punctured wheels to maintain contact with the road and prevent the car from skidding. After the assassination attempt, De Gaulle had a newfound admiration for Citroen, and when in 1969 Fiat attempted to buy the French manufacturer, De Gaulle insisted the brand would stay under majority French ownership. 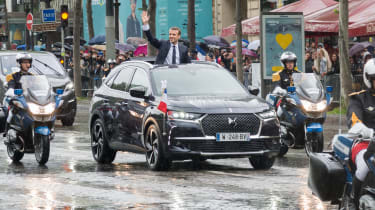 Continuing on the theme of French dignitaries driving DS' you can wave out of, Emmanual Macron uses a DS 7 Crossback for his duties. Not only was it the first DS 7 on public roads, but the 'Presidential' also previewed many new features which would later become available on production cars. Such as, DS connected pilot and DS active scan suspension. While it lacks the tank-esque characteristics of some leaders bulletproof cars on this list, it does have a certain amount of relevance in today's SUV-packed market. 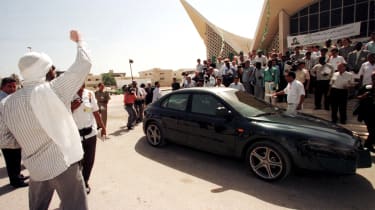 Back in 2009, Libyan leader Colonel Muammar Gaddafi announced he had designed his own car: the Libyan Rocket. It was dubbed by ministers as “the safest car in the world” and featured collapsible bumpers. The car was set for production in Tripoli, but plans fell apart following Gaddafi’s ousting in 2011. The Libyan leader also owned a custom electric Fiat 500 reportedly worth £175,000. It featured a map of Africa with Libya singled out in green in place of the Fiat symbol. 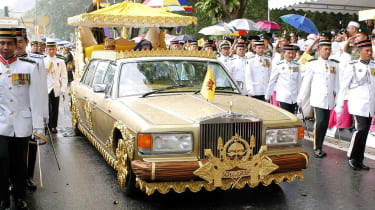 Modesty isn’t something familiar to the royal family in the small, oil-rich nation of Brunei. The monarchy of the tiny state of Borneo has been estimated to own in anywhere in between 2,500 to 7,000 cars. The Sultan of Brunei, Hassanal Bolkiah holds the current Guinnes World Record for the largest collection of Rolls-Royce cars, estimated at around 500. His collection includes this Silver Spur covered in 24 karat gold, as well as a Formula One car collection dating back to the 1980s. The Sultan is also an owner of a 747 that he’s known to pilot himself. 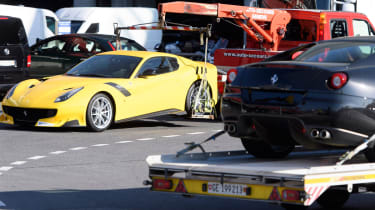 Like Brunei, the ruling family of Equatorial Guinea has benefitted from vast oil resources. Its president, Teodoro Obiang Nguema is Africa’s longest-serving leader, having seized power in 1979. He recently promoted his son, Teodorin Obiang, to vice president of the country. Obiang Junior, however, has been linked with corruption and embezzlement crimes and is facing trial in France. The criminal implications saw Swiss authorities seize 11 of his cars, including a Bugatti Veyron, a Maserati MC12 and four Ferraris.

Barack Obama - 44th President of the US 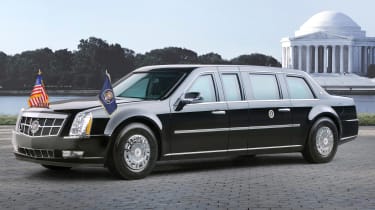 This is the car that took Barack Obama to and from his 2009 inaugaration and was to become a regular conveyance for the 44th US President on trips accross the globe. The bullet-and bomb-proof bodywork has 130mm thick glass with only the driver's window capable of opening - so the driver can pay tolls.

It's also what President Donald Trump is using while he waits for Beast 2.0 to be ready, which, is expected to arrive in the third quarter of 2018.

Ronald Regan - 40th President of the US 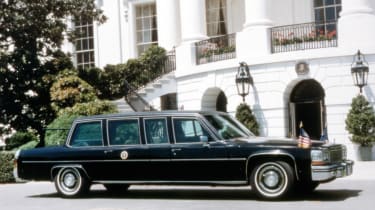 Ronald Reagan was another US President who favoured a Cadillac. This is his 1984 Cadillac Fleetwood Seventy Five Presidential Limousine, a forerunner of the bulletproof beasts that Obama and Trump are transported in. The 4-door car was rear-wheel drive with a 6.0-litre V8 engine mustering a modest 140hp. That certainly doesn’t should like a lot of thrust to shift this 6,205mm long, 2,161kg limo.

Dwight D. Eisenhower - 34th President of the US 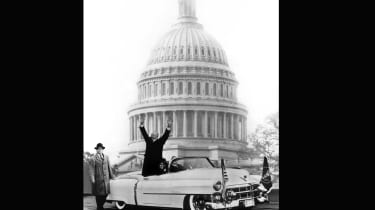 This is US President Dwight D. Eisenhower, who is said to have been a keen car enthusiast, enjoying his inauguration on January 20 1953. The car is a 1953 Cadillac Eldorado Convertible, the first generation of this noble model line that would go on to have ten generations, with the last Eldorado Convertible going out of production in 2002. Needless to say, the Mk10 didn't have the panache of Dwight D's wheels.

Harry S. Truman - 33rd President of the US 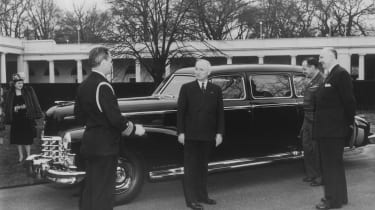 Cadillac has a long history of providing president's cars. Harry S. Truman, who preceded Eisenhower, had a Fleetwood 75 limo, and this 1947 third-generation model had a beefy V8 and and oodles of chrome on the grille. Truman took over from Franklin D. Roosevelt after he passed away on April 12th, 1945, but stormed to victory in the 1948 election despite being widely considered the underdog.

Thinking of becoming a dictator? 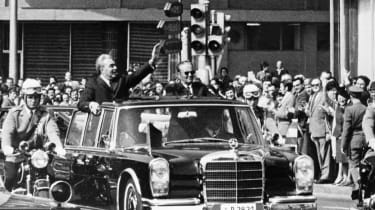 So, you’ve just overthrown a government in a ‘peaceful coup’ and are thinking of what car to buy – history would suggest it’d be the Mercedes-Benz Grosser 600.  Honourable owners of the 6.3-litre V8 limousine include the likes of Tito, Nicolae Ceausescu, Pol Pot, Leonid Brezhnev, Idi Amin, Fidel Castro, as well as North Korean leaders Kim Il-sung, Kim Jong-il and Kim Jong-un. The cult status of the 600 meant it was also the vehicle of choice of Bond-villain Ernst Stavro Blofield – the evil man stroking a white cat.

Which Presidential car is your favourite? And are there any good ones we've missed? Join the debate in the comments section below...