Car evolution: how our cars have grown bigger, faster, safer and better 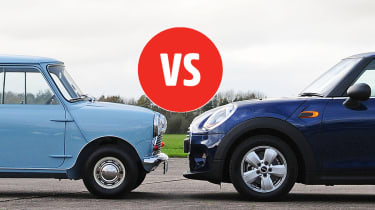 Cars are getting bigger - there's no getting around that. Some of the UK's best selling models are now far larger than their predessesors two, three or four generations ago.

We at Auto Express get regular comments from readers via email and on our social media channels complaining about just this. There are those who feel new cars have become too cumbersome and it's been well reported that some models are now getting so big that they're struggling to get into parking spaces.

Despite all this, manufacturers will tell you that cars are growing in size for very good reasons - one of the key ones being safety. Advances in safety tech mean that cars have to have thicker pillars between windows, chunkier doors to make way for stronger bracing and fatter bumpers and wings to accommodate crumple zones. It might mean a tighter squeeze through certain slim streets or in multi-storey car parks, but it also means that you and your passengers are better protected than ever should the worst happen.

With all this in mind, we've compared some of the UK's best selling new cars against their original counterparts to see just how much they've grown over the years and what else has changed.

Scroll down to see our findings as we compare old with new and chart the evolution of our cars... 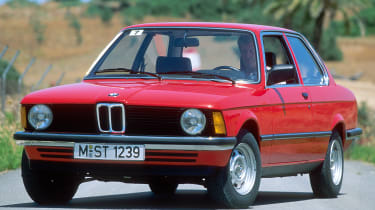 It's more than 40 years since the 3 Series made its first appearance. And the latest Mk6 retains obvious design cues from that model – namely the BMW kidney grille. With MacPherson front struts and disc brakes, the original E21 earned a reputation for great handling, and this has carried on to the current F30. Of course, they’re very different inside. The E21 had a big centre console, with rounded-off edges for safety. Today, safety kit includes blind spot warnings and lane assist. 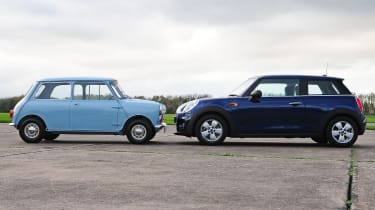 The original Austin Mini was a car true to its name, but since BMW took over the brand in 2000, it’s grown with each generation. At 3,821mm, the latest MINI is nearly a metre longer than the original. The Austin Mini was intended as a budget buy for the whole family, and MINI’s emphasis on offering a lot for the cash hasn’t been lost over the years; the current generation remains one of the best value-for-money cars for driving fun. 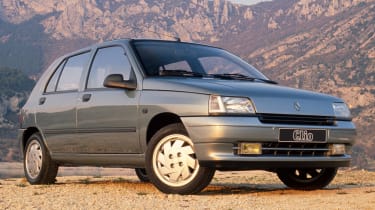 The current Clio isn’t much faster than the original, but it’s certainly much safer. Euro NCAP awarded the Mk1 supermini just two stars for adult occupants in its crash test back in 1997, and an appalling one star for pedestrian safety. However, despite poor safety features, it was still crowned European Car of the Year in 1991. In comparison, the latest fourth-generation Clio scored a full five stars – so while some cars haven’t progressed a lot in speed, they’ve leaped light years in safety. 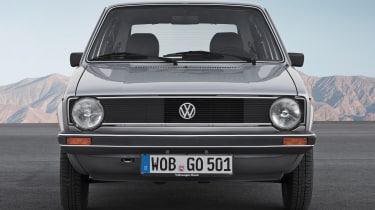 Seven generations on and the Golf has put on some weight. At 1,395kg, the Mk7 is now nearly twice as heavy as the original, but there’s a good reason for this. It’s around a metre longer and has a lot more kit and safety systems on board. The original’s plastic-heavy interior has been replaced by a stylish layout with a 5.8-inch touchscreen. The Mk1 Golf was known for its early adoption of diesel power, and the current range is one of the best, with its efficient and refined TDIs. 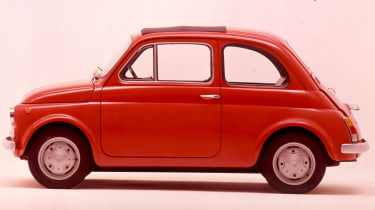 Fiat's original Cinquecento started out with a 500cc air-cooled two-cylinder engine and is considered one of the first ever city cars. It’s now 60 years since the first models rolled off the production lines, and while the current car is much bigger – it’s over half a metre longer – it looks remarkably like the original. Maintaining the iconic design isn’t the only thing Fiat has done, as the current range retains its agility in town, nipping in and out of traffic, especially in 0.9-litre TwinAir guise.

What do you think of the growing size of cars these days? Do you have any other examples of when cars have grown significantly throughout the generations? Let us know below!