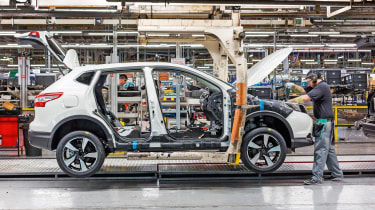 The Government should ensure Brexit negotiations prioritise jobs and investment in the UK automotive industry, the Society of Motor Manufacturers and Traders (SMMT) has announced.

Highlighting new figures that show the car industry is responsible for 10 per cent of the UK’s gross domestic product, turning over £219 billion each year and generating £3 for every £1 invested, the SMMT welcomes the “breathing space” afforded by the recently-confirmed Brexit transition deal.

But the motor industry body predicts new car production is set to fall slightly in 2018, and reiterates the fact that the EU is our biggest trading partner. That reliance on the EU means the UK car industry must maintain influence on European regulations such as CO2 limits, the SMMT says.

Calling on the Government to ensure the UK remains able to offer globally-competitive business rates, capital allowances and energy costs after Brexit, Mike Hawes, the SMMT’s chief executive said: “Last week’s deal on the transition period was essential, providing a short term boost and a degree of certainty for investors. The next major hurdle will be securing a new, comprehensive trade agreement with the EU and our partners across the world.”

Hawes continued: “In the meantime, the Government must help make the UK as competitive as possible. The Government’s Industrial Strategy and Automotive Sector Deal is a positive step but we need concrete action if we are to stay ahead in what is an intensely competitive global environment.”

Over 80 per cent of all cars built in the UK are now shipped abroad, with the European Union the biggest buyer.

The SMMT has also previously warned that “around 10 per cent of our exports could be threatened overnight” if the UK fails to maintain all of the current trade benefits it has with the EU.

SMMT chief executive Mike Hawes said: “While it is good to see global appetite for British-built cars reach record levels in January, this only reinforces the industry’s increasing reliance on overseas demand. Future growth will therefore depend on maintaining our current open trade links not just with Europe but with key international markets.

"A transitional deal will be an important first step but, in the long term, a seamless relationship between the UK and Europe must be maintained. The EU remains the third largest new car market in the world and, given it is on our doorstep, it is not surprising it accounts for more than half of our global exports.”

Could Brexit force Japanese carmakers out of Britain? Their ambassador seems to think it could...